21st of June...the longest day, it bloody felt like it too when I left Druridge at 9pm tonight and having been there at 4.30 this morning!

JF and I were ringing this morning, it was steady (for June), ringing 18 new birds and 3 retraps. It was all 'bread n butter' local breeding stuff, mainly juveniles, but worth it nonetheless.

There are less sedge warblers at Druridge this year than normal, with only 4-5 singing males on territory, last year there was double this number, is this replicated at other sites in the County, blackcaps are thin on the ground (1 singing male), but there are plenty of common whitethroats.

There were still plenty of manxies moving north offshore this morning, in 10 minutes between net rounds we counted 63, a greenshank called overhead and one was on the Budge fields. ADMc told us he had seen a cuckoo there too, but we missed it.

So I headed back to Druridge tonight for a couple of hours between 7pm and 9pm. I caught up with ADMc's cuckoo, in the same place he had seen it, still getting harangued by the same meadow pipits no doubt. The other highlight tonight was marsh harrier, what appeared to be a sub-adult male hunting over the fields to the north of the big pool.

Offshore there was about 140 common scoter in two flocks, another large flock was off Hadston Carrs, a roseate tern was fishing and 28 manxies moved north. 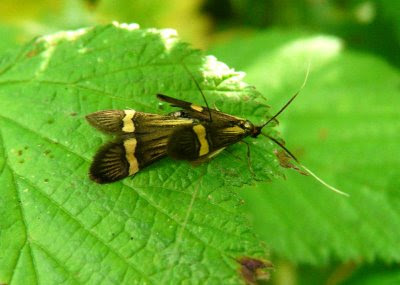 When we were ringing, there were hundred's of the insects, I've no idea what they are, they flew in a strange 'floaty' up and down way, in herds....

Any ideas what they are?

Martin Kitchen has put this otter video from Druridge on YouTube, the best bit is the last 3 seconds!!!!
Posted by Ipin at 22:53

Hi Ipin.
Your un-id`d insects are Degeers Longhorn Moths (Nemophora degeerella). Like you say they have a very strange flight behaviour.

More Whitethroats and Blackcaps than last year down here on my patch in in Hadlow (Tonbridge) Chiffies about the same. Spotted flycatchers just one pair left,same for garden warbler, Nightingales none! Willow warbler none. Any other warblers are a bonus here!

Thanks Dean, they are really nice there were hundreds of them yesterday!