How many honkers does it need to do the job of one cow?

There were 161 greylag geese grazing away on the Budge fields this afternoon. There haven't been any cows grazing there since November.

Grazers measure livestock in units, one cow is one unit, one sheep is 0.15 units, one goose is ?

It's going to take more than 161 honkers to get the Budge fields looking like suitable lapwing habitat by the spring, especially as they won't touch the big clumps of rush dominating the site, NWT seem as reluctant to tackle the rush clumps....

Druridge Pools is in Higher Level Stewardship, a European agricultural subsidy that pays the landowners to manage the land for maximum environmental benefit....

The fields are looking good for wildfowl at the moment and the pair of pintail seen earlier this week were still hanging present, wigeon numbers are back up to normal since the thaw with an impressive 285 today with about 160 teal and 52 curlew.

Still very few passerines to be seen, a flock of 17 goldfinch was notable. Offshore, a great-northern diver was in the bay with three red-breasted mergansers and a handful of common scoter. An eider flying south was a year tick.

I feel as though I have been neglecting Druridge of late, and am paying the price.

A combination of work, a broken car and very little daylight has meant no visits to Druridge since last weekend. Today,  I was in the Cheviots squeezing atlas tetrads in while the weather was good.

Whilst I've not been at Druridge, others have been, and have been seeing pintails, whooper swans, velvet scoters, short-eared owls......All good patch birds which could be missed (I didn't see SEO last year).

It was a beautiful day in the Cheviots today, glorious sunshine and firm underfoot due to the heavy overnight frost. We managed 21 species in four hours over two tetrads around South Middleton and the Dod, despite hunters being out in force. A full ermine stoat at Bywell on the way home was nice.

Hopefully I will be at Druridge tomorrow all being well, we have a new ringing site in Ellington to test out in the morning though.
Posted by Ipin at 16:34 No comments:

I find birding the patch at this time of year hard work.- Once the initial flurry of year ticks is over in the first couple of weeks of January, it becomes harder until the first of the spring migrants turn up in March.

Until then, I'll keep slogging away. It won't be long before the first wheatears, chiffchaffs and sandwich terns arrive. Before them the Shelducks will be back in February.

I walked out to Low Chibburn Preceptory today, to see if anything of interest was roosting in it. It's an interesting place, having served various uses from hospital for pilgrims, a dower house and a World War II look out. 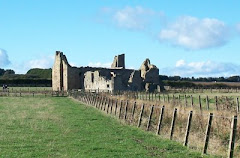 This is how it looks today

There wasn't any birds there, but there were some fresh barn owl pellets. Walking back by the farm I added wren, song thrush, robin and reed bunting to the year list.

The sea was miles out but I did manage to add a solitary gannet to the list.

I did my WeBS count today, a day early, because I have a rather important football match to go to tomorrow. I'm already starting to get nervous, I hate derby days. The buses leave St James' at 10am, we've found a pub that opens at 9 so we can get a couple of nerve settlers in before we set off.

No bitterns today, or yesterday when I checked at first light....humph.

There was lots of wildfowl on the Budge fields, mainly wigeon, teal and mallard. Shoveler, gadwall, goldeneye and tufted duck were year-ticks.

It was very windy, force 4-5, from the west which made the big pool very choppy, giving the four coots cowering in the Phragmites bed, the place to themselves.

Nothing much else to report

AGGGGHHHHHH New bird for the patch...... and I didn't see it

Gripped off big style!
I went to the Northumberland and Tyneside Bird Club Meeting tonight to hear an excellent talk by Huw Lloyd about Peru - another place added the list of places to go!
Anyhoo, that aside, shortly after arriving at the venue, Trevor Blake and Tim Dean, our County Recorder tootle over to me, Tim casually announces that he had been watching a BITTERN..yes BITTERN at Druridge Pools at lunchtime today. Not a flyover, commuting between Cresswell and Chevington either, this was sat out on the Budge fields in front of the screen hide.
See the NTBC sighting page for the gruesome truth!
For some reason, Birdguides wouldn't put he news out? I've given Tim my mobile number.
This wouldn't be a just a patch tick for me, this is almost certainly a new bird for the patch.
I'm off to cry myself to sleep.
Posted by Ipin at 23:22 3 comments:

I've participated in bird races for a few years now, both winter and summer. We haven't done the summer birdrace for a couple of years now, midnight til nigh on the following midnight, it takes up the whole weekend including time to recover, it's tough going and difficult to find a free weekend.

I do enjoy a winter birdrace, as long as it's not on the 1st or 2nd of January, for some reason, there didn't appear to be a winter birdrace this year at all (unless nobody told me, which is possible) and this got me thinking about the whole principle of birdracing.

As fuel becomes more expensive and people think more about their carbon footprint, twitching has become more of a taboo, hare-arsing around the country in the pursuit of rarities, burning the worlds precious resources..... I wondered whether the cost of fuel and guilty conciousness are making people think twice about bird racing?

On a summers bird race, I bet it is easy to clock up 250-300 miles roving the far-flung bits of the county in search of ospreys, wood warblers and black grouse. At £70 to fill the tank, it's an expensive day out. I also got thinking about Stewart and his OFFH (on foot from home list) and ADMc and his incredible bike list of 2009. People have year lists without resorting to using a car, or any form of motorised transport, could a low-carbon birdrace be a possibility?

It could be on foot, on a bike or on the bus or a combination of the three..... It's got me thinking!

In recent years, our team and no-doubt others have developed finely-tuned routes that they stick to and for me, that got a bit dull, as the planning was the best bit!

So, any thoughts on a low-carbon summer bird race? Anyone fancy a challenge?
Posted by Ipin at 23:20 7 comments:

Email ThisBlogThis!Share to TwitterShare to FacebookShare to Pinterest
Labels: birdrace

My only visit to the patch this weekend was yesterday morning, there was no updates last nights due the appalling display by the toon in the FA Cup which saw us exit the competition at the hands of lowly Stevenage. I was too emotional to post anything last night!

I was cheerfully optimistic about the football and my visit to Druridge yesterday morning, I shouldn't have been about either.

There was very little to see at Druridge and the westerly wind made it bitterly cold. The pools is largely still frozen, a few hardy teal and mallard hanging about by the unfrozen patch.

The normal wigeon flock has been gone for weeks now, I wonder where they go? Grey herons are thin on the ground too, I hope it is a case of them having moved on rather perishing, we might even get a ringing recovery from the pullus we ringed last spring, the big rings should be readable in the filed if a bird is on ice.

Still no robin, dunnock or wren on the 2011 patch list, again,  I wonder where the wrens go, they tend not to fly far so it'll be interesting to see if we catch any of 'our' birds in the spring.

On the drive to Widdrington farm shop for a fat-free diet pasty, an unfortunate moorhen, frozen off the ponds, was a roadkill victim by High Chibburn Farm and the little owl was in its usual tree on the lane.

Back on the patch today for the first time this year.

Birding on new years days is never really an option for me and with the Toon away to Wigan yesterday today was my first chance to get out.

I did promise a short report of 2010, I ran out of time on NYE, too busy preparing tapas and making  my 'Captain Chaos' outfit. It might still happen.... Amazingly last years bird species total was exactly the same as 2009  - 157! One short of 158 in 2008 and well short of my best ever total of 168. Two new species were added to the patch list, great-white egret back in April and red-legged partridge on Christmas Day.

Hopefully 2011 will bring a few more patch ticks, there are still some commoner species I still need such as bluethroat, pallas's warbler, icterine warbler, wood warbler and tree pipit.

Today, the 2011 list got of to a fair start given the very cold weather we have been experiencing. It was still cold at Druridge with a biting NW wind, the ponds and fields still frozen. I walked up to the Preceptory and down to High Chibburn and back via the hamlet.

A quick look on he sea produced five nice drake red-breasted mergansers in full summer garb and a single red-throated diver. Passerines were thin on the ground, with the winter thrushes present last week apparently retreated back inland, robin, dunnock and wren also notable by their absence.

My first raptor of the year was a buzzard, out from the back of the big pool, I caught up with Bob Biggs and he picked up a distant peregrine on the patch boundary - nice one Bob!

Other good patch birds to get the list rolling were stock dove, woodcock (still plenty about), long-tailed tit, yellowhammer (still good numbers on the roof of the farm) and collared dove, once a rare bird at Druridge, have now taken up residence at the farm.

Rabbit and hare were the only mammals of the day.