Way back at the start of 2010, or even earlier, I decided that my focus for the year would be to to a Common Bird Census (CBC) style survey of the whole patch. Bird Census Techniques (Bibby et al) recommends a mid march start for the first visit with visits every 10 days or so after that.
Druridge being oop north, I opted for later start, but not this late.
I was working at Birmingham NEC all weekend so today was my only option and to be honest, conditions were not optimal to say the least, so much so that the rain scuppered my efforts with about a quarter of my route to complete - so not a good start.
Birds were thin on the ground, reed buntings were evident with four singing males, only four singing wrens which is a bit worrying and the only singing chiffchaff I had was in the dunes!
For stuff not covered by the survey, a few grey herons lifted out of the heronry when I went by, there were still lots of duck on the Budge fields and eight mutes swans flew S. A female wheatear was the only migrant.
The forecast for the next few days looks a bit dicey, heavy snow inland which may or may not reach the coast, but it's going to be wet whatever. As a result I have postponed my planned week off work and am going back tomorrow taking next week off instead, lets hope my gamble pays off....... Metcheck's long range forecast predicts a prolonged cold spell beyond Easter with a continuous northerly for the whole week - that'll slow migration down a bit!
89 linnet
90 greenfinch
Posted by Ipin at 13:39 2 comments:

I only managed a single, brief, visit to Druridge this weekend, just for an hour or so this afternoon. It was sunny but a cold westerly wind spoiled the day a bit.
The highlight was another early summer visitor returning, a chiffchaff, picked up by the entrance to the Budge screen, it wasn't calling, just flitting through the bushes until it was chased by two blue tits.
There were lots of black-headed gulls on the Budge fields, but sadly no sign of the med gull reported here during the week. Offshore, tow year ticks came in the form of a single kittiwake and a pair of fulmar which were doing some strange courtship thing. I am away all next weekend so hopefully will get out during the week.
85 chiffchaff
86 fulmar
87 kittiwake
88 long-tailed tit
Posted by Ipin at 21:43 2 comments:

Only got to Druridge once, briefly, this weekend, to do the WeBS count this afternoon.

We've spent the weekend out at Grindon for the Illuminating Hadrian's Wall event, I was really lucky to be chosen as an illuminator and got to light at a beacon at one of the best spots on the whole wall, just above Cuddy's Crag, between Housesteads and where the Pennine Way crosses it - superb location.

The event was follwed by a BBQ at Carraw Farm B&B then a party at Grindon...an excellent weekend!

We did the WeBS count this afternoon, a gorgeous sunny spring afternoon turned to a howling storm lashing rain in through the Oddie hide in a matter of seconds. Nothing new or unusual to report, there were really good numbers of snipe (30+) and redshank as well as the usual ducks. The shoveler count has gone up to 13 and there are still nine goldeneyes including some really smart drakes.
Posted by Ipin at 21:50 2 comments:

Spring is officially here, I saw my first proper migrant at Druridge today, a male wheatear in the dunes at the north end. I was actually there on business, talking to a colleague from the North Pennines AONB about twite.

We didn't see any twite, they seem to have gone form Druridge now and from Coquet Island too. As well as the wheatear, which has to be the earliest I have seen at Druridge, we had a merlin rattling the starlings and seven pale-bellied brent geese by the hamlet.

Another sign that spring has sprung was spotted on Sunday, the first flowering coltsfoot on the banks by the Oddie hide, I also saw my first gannets of the year on Sunday too!

I'm just back from my trip to the Eastern Canaries (Fuerteventura and Lanzarote) and have to report it was a great success......until I got messages about green-winged teal on the patch....every bloody time I go away....

We got our two target birds with no problems, with some good gen from Alan Gilbertson, we had views of Fuerteventura chat within an hour of getting off the plane! 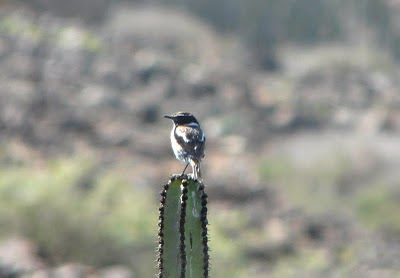 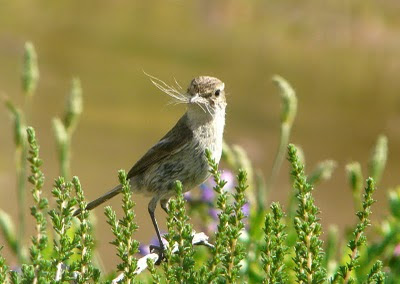 female gathering nesting material
Our second target took a bit more getting, ignoring the rules of the hire car company we took out Renault Kangoo for a bit off-roading on the planes, picking up some other good desert species we eventually got good views of three bustards, but no display. 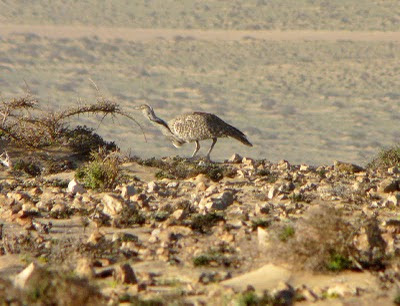 Houbara bustard through the heat-haze on the planes near Pared 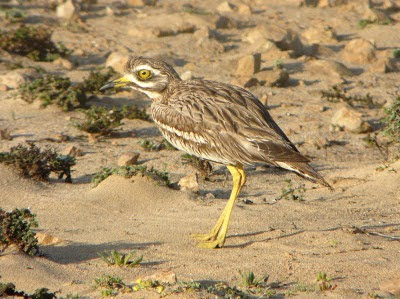 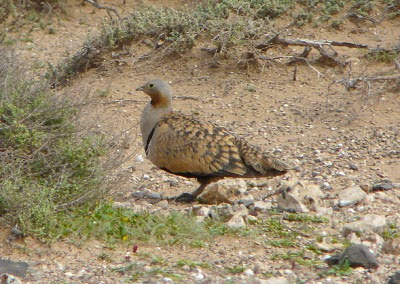 Black-bellied sandgrouse - we saw these displaying 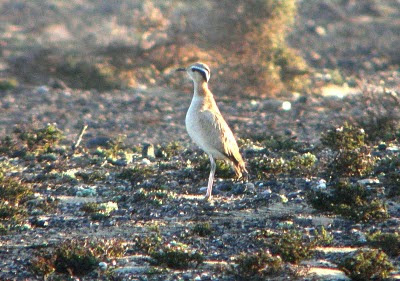 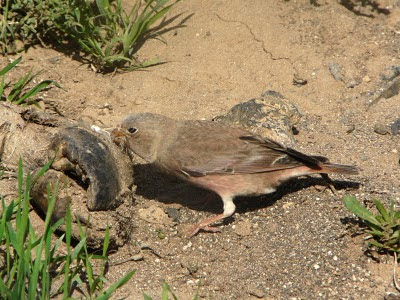 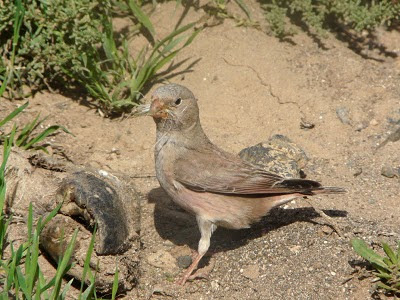 This trumpeter finch was gathering nesting material from a dead goat 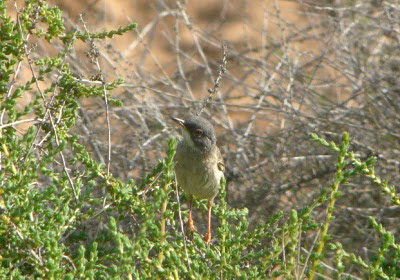 Spectacled warblers were common in the barrancas 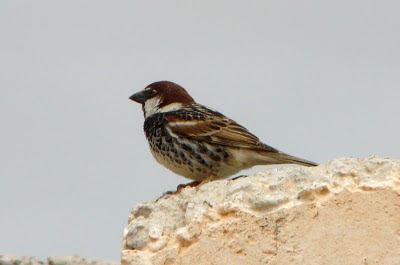 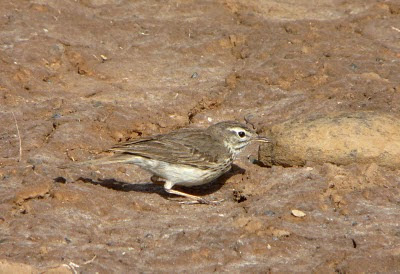 Other good birds included greater flamingo, southern grey shrikes, sardinian warbler, cory's shearwater and canary as well as the local race of blue tit which is quite striking. I'll produce a trip report when I get the time.
Hopefully the GW teal will still be around at the weekend...
Posted by Ipin at 00:15 3 comments: