We had our first ringing session of the year at Druridge today. Normally we would start earlier than mid-June, but the alders have only just come into leaf, some of them are still bare.

Five of the whitethroats were juveniles, probably the same brood as they were all caught in the same place.

We also caught four baby robins (as well as their parents)


and six willow warblers (and a parent)


We caught one juvenile goldfinch and re-trapped great and blue tits and a dunnock.

Interestingly we didn't catch either blackcap or chiffchaff which both seem to be thin on the ground this year.

This evening there were eight summer plumage sanderlings on the beach, presumably;y these birds are just late heading north? There were also six summer plumage red-throated divers in the bay.

Quick update from the weekend

No photo's I'm afraid and there probably won't be for a while as it looks like my 300mm lens is knackered. I might manage some butterfly shots?

I've inherited the Druridge Links butterfly transect from the National Trust, I had a quick today and had some wall browns and small coppers. Will start it properly next week once I've downloaded the stuff, I actually did this transect for a summer back in 1997 or 1998 when I worked for the National Trust as the seasonal warden at Druridge.

Highlight of today though goes to a STONKING summer-plumage great northern diver, which was loitering close inshore, just of the links. The tide was on it's way out but still a stunning bird. It was made even more better when a fishing roseate tern came into the same scope view. My first 'rozzas' of the year.

Another year-tick came with tonight cold NNE winds - manx shearwaters. A couple of little parties headed north. Also this evening there were at least nine little terns moving between the Budge fields and the big pool.

No sign of any passerine migration either at Druridge or at Lynemouth Sewage Works where I spent this morning ringing.

Both roseate tern and manx shearwater score two points in the Patchwork Challenge taking my species total to 127 and points tally to 159.

Little gulls were the avian highlight at Druridge over the weekend. I saw at least four on Friday evening and again today. I tried photographing them today, one shot (below) and my camera died...."Err 01 - Communications between the camera and lens is faulty. Clean the lens contacts". I've looked at some of the forums and it looks as though I might need a new lens. Bugger!


The other highlight today was five black-tailed godwits of the islandica race on the Budge fields.

There were five hares on the Budge fields, boxing and chasing each other about at high speed. 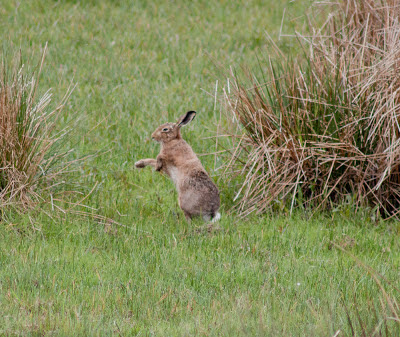 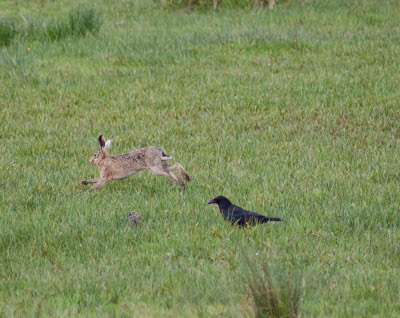 I checked the heronry the other day, only six occupied nests this year, down from eight last year and twelve about five years ago. Many of the heron young have fledged now and pottering about the budge fields, harangued by lapwings.