Normally in July and early August, even the most avid birdwatchers sometimes turn to butterflies, dragonflies, bugs and even flowers to keep themselves occupied at the end of summer while they wait for autumn migration to start, this is especially evident on the local Whatsapp grape vine with reports of all sorts of things outnumbering posts about birds. I am no different, I spent my spare time in the summer trying out the macro lens on any insect I could find.

But as soon as the first waders arrive back from the arctic and whinchats are back on the coast, they re-focus their attentions back to birds...usually.

Today was the last day of September and autumn migration should be in full swing, the bushes should be alive with chiffchaffs, goldcrests and maybe, something more exciting. This morning I had two hours to spare on the patch and found myself not grilling the bushes for warblers but photographing butterflies and dragonflies - it was like July!

A run of wall-to-wall westerlies has resulted in very few birds arriving on our shores. There has been the odd report - a wryneck on the Farnes, hoopoe on Holy Island and a black restart or two. At Druridge,  a wren was a highlight after seeing none since the beast from the east and a single chiff was 'wheeting; from the bushes. Things aren't going to improve, with continued westerlies forecast for the next two weeks at least.

The only noteworthy migrants were more barnacle geese flying over.

It was amazing to seeing dozens of speckled wood butterflies, I could see over twenty from one spot this morning. A lot of the butterflies are looking a bit worn now but there was a nice fresh small copper today, which I failed to photograph.

The barnies are back

Today saw a huge influx of barnacle geese into the area and that was reflected in my evening seawatch at Druridge.

These barnacle geese have just arrived from their breeding grounds and most of them are just passing through our area before heading west to the Solway, Scotland or Ireland. 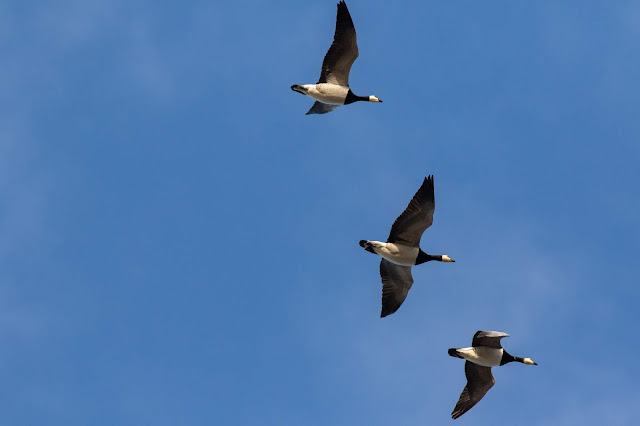 I had an early finish from work and was seawatching from 15:40 until 17:40, the wind was variable, out of the South-east when I arrived, moving to ENE before coming back round to S'easterly when I left because we are sat in the middle of a pressure system.

Skeins of barnacle geese from 11 to over a hundred came through, going both north and south. I picked up the biggest flock, of over a hundred birds, right out to sea and watched them come in towards me before veering off north towards the Country park. There was single white bird among them - a leucistic individual, There were two leucistic barnacle geese at Lindisfarne last winter.

The light was fantastic and away from the geese, the seawatch started well with a distant sooty shearwater headed north. I had to wait for over an hour for another and a third, much closer bird followed it. Two arctic skuas flew south close-in, followed by a bonxie, looking gingery in the evening sunshine. Another arctic skua was harrying a kittiwake just offshore.

Manx shearwaters drifted through, mostly singles and not numerous. A black-throated diver went north and there were a few red-throated divers both heading north and on the sea. A few ducks were noted with small groups of common scoter, wigeon and two tufties.

We were ringing birds at Druridge this morning.  It was the same day as the North-East Skinny Dip at the Country Park and we had the dippers 'on call' as we put our nets up and they went into to the sea - It must have been cold as the calls were all high-pitched!

On a day dominated by tits, we were very surprised to catch this in one of our mist nets.

Janet and I were extracting a robin when we heard a bird, which sounded like a woodpigeon, crashing through the bushes behind us. Out of the corner of my eye I saw a bird hit the net a bit further along from where we stood, expecting it to be a woodpigeon, I was very surprised to see a barn owl in the net! It was quickly extracted and taken back to the car to be ringed.

It was an adult (probably in it's third calendar year) and a female - you can tell this from the dark spots on the breast and flanks (this one is very spotty - they are variable). We've caught a few long-eared owls in mist nets at Druridge but never a barn owl.

Between 0630 and midday, we caught 33 birds, mostly tits, including a blue tit which we ringed as juvenile in September 2014, canny for a blue tit. We also controlled (caught a bird that had been ringed elsewhere) a robin and a blue tit. The blue tit will probably be local, but it will be interesting to see where the robin has come from.

We also caught our first goldcrest of the autumn, chiffchaff, whitethroat, blackcap, dunnock, and reed bunting.


Between about 8 and 10 am there was steady stream of skylarks headed south but only single figures of meadow pipits. This kestrel was feeding nearby but I only managed to get 'arse-on' shots of it.

I went back down to the patch in the evening, prompted by some seawatching reports from elsewhere in the county. I arrived at 6pm and stayed until just before 7, leaving in time to catch The Archers on Radio 4. Seawatching totals from 1800-1850 were (all north)

and 7 red-throated diver on the sea

By the time I left there were upwards of 3000 gulls on the beach between Druridge and Chibburn Mouth, mostly common and black-headed.

Just waiting for some easterlies now...

I've been away from the patch for the last couple of weeks on my near-annual migration to Tarifa in southern Spain to witness the spectacle that is the raptor migration across the Straits of Gibraltar as birds of prey from Europe travel south to Africa for winter.

Conditions were very good for the birds for the first half of the trip, with tens of thousands of birds passing through but high - like hayflies as Alan Gilbertson describes them. These were mostly honey buzzards and black kites with short-toed eagles, booted eagles, Egyptian vultures, sparrowhawks and griffon vultures. When the wind blows, which it does a lot in the Straits, the birds drop lower (especially in the Levante wind from the East which could blow them into the Atlantic) bringing them closer to the observers and photographers who are also there in great numbers.

As well as raptors there are migrating storks, waterbirds and passerines alongside the resident birds in the peninsula.

This photo sums up Tarifa for me, on the good days they just keep coming at you...

We've had news from the BTO about a robin we ringed in July last year, it was still in juvenile plumage when we caught it so will have hatched at Druridge. Sadly it was found dead last week in Redcar, where presumably it had taken up residence. Even though Robin is the second-most commonly caught bird by us at Druridge, this is the first ever recovery we've had.

The BTO have also released the annual ringing report for 2017 which you can find on their website.

The report gives ringing totals by species and area and list notable recoveries of birds including a report of a Leach's Petrel we caught in in July 2016 at Druridge (read about it here) which was already ringed, having been caught on Inner Farne two tears earlier. The same bird was caught again on Inner Farne in July 2016, ten days before we caught it at Druridge and it was caught again in July 2017 way up at Sumburgh in the Shetland Islands. Recoveries like this give us a fantastic insight into the movements of these seabirds. Here are the details: 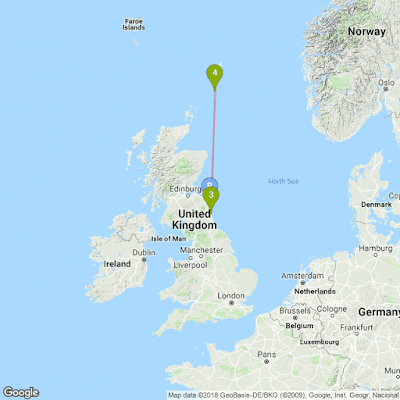