I did my WeBS count today.

There was a very blustery SSW wind blowing which didn't make counting easy. A lot of birds were seeking shelter behind the tussocks of reed so I have probably under-counted some species.

Whilst counting ducks from the little hide, the curlews and redshanks that had been over by the Budge screen lifted and and settled a bit nearer to me. As I was counting the curlews, a smaller bird shoved its very long bill under it's wing and went to sleep - "that's the dowitcher" I said to myself as there was nobody in the hide.

Curlews counted (53) I came back to the long-billed bird. It was now obscured by sleeping curlews. Patience eventually paid off when the pack reshuffled and the dowitcher was exposed in all its glory - having a bit of a preen.

This is the third time I have seen this bird at Druridge. I am sure it must get up here more often than it is reported. There are definitely less birders getting to Druridge whilst the road up from Cresswell is closed which is no bad thing.

Amongst the wader flock were also two dunlin, two black-tailed godwits and a ruff. There are still about 300 wigeon and 70 teal on the Budge fields.

Away from the WeBS count, there was little to report. The National Trust were having a bush-craft day for kids. 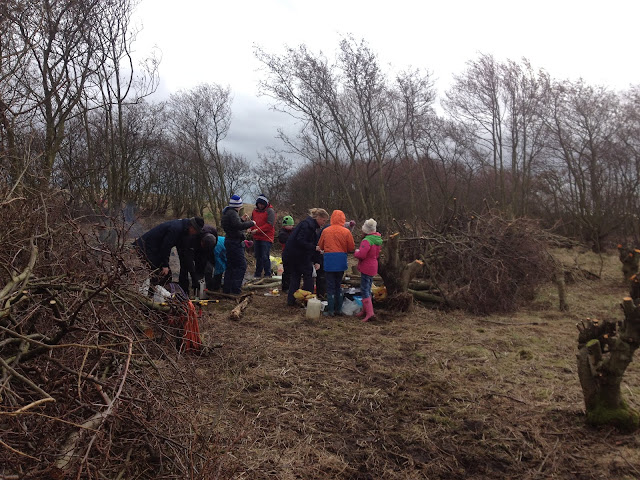 Four whooper swans were in the field in front of the cottages, hanging around the feeding troughs with a couple of mutes and a greylag goose. 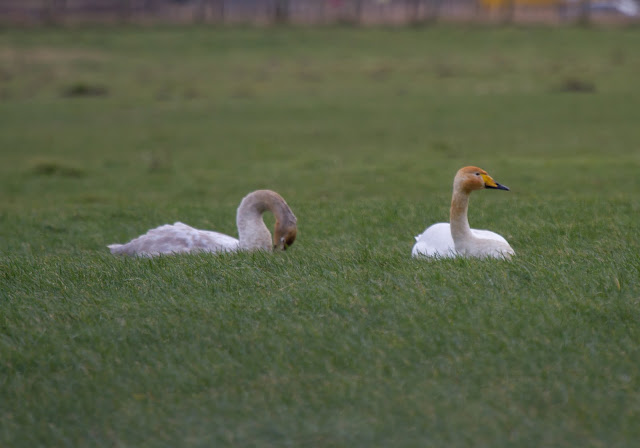 Another very windy day, but at least it was dry.

I didn't have high-hopes for my visit to the patch today, the weather wasn't good and it is February, my least favourite month alongside December.

After an uneventful look on the sea, I headed for the Budge screen, it was really windy, even inside the screen. I had a quick scan through the bins first and to be honest, if it had looked quiet I was just going to go home, but it wasn't. There were lots of waders. About a dozen redshank in front of the hide, with more over the back, 30 or more curlew and over 100 lapwing - more waders than usual. I picked out a squat, grey bird among the lapwing so got the scope out - the wind was making viewing difficult though.

The grey wader was a knot - a scarce bird on the patch, usually only picked up as fly-over or in a group offshore during autumn passage. The next bird I got in the scope was even more unexpected - the long-billed dowitcher had left it's usual haunt at Cresswell and come back to the Budge fields. The first time I saw it, on New Year's Eve it was flying off, so it was really nice to get some good views of it as it fed just beyond the water in front of the hide.

A really strong gust of wind sent all of the waders into the air and the wigeon, that had been grazing, back onto the water. I scanned through the lapwings, curlews and redshank when they resettled but couldn't pick up the dowitcher again, the knot had gone too. I add three black-tailed godwits, two ruff and three dunlin to the tally though, but in the end the wind got the better of me and I headed home.

The dowitcher and knot take the year list to 90 species. As for the Patchwork Challenge, it depends on whether the dowitcher counts as self-found. When I re-found the Cresswell stilt sandpiper on the patch it counted, so I am presuming the same rules apply here.

There were no other birders at Druridge today, I presume the long diversion from Cresswell pond because of the road closure at Hemscotthill is putting them off.

Just outside the patch boundary there are still a couple of hundred fieldfare with lesser numbers of redwing and mistle thrush just of Druridge Lane. I had a scan through them but picked nothing unusual up.