Not a one trick pony

NWT have proved they are not a one trick pony when it comes to grazing the Budge fields. Previously cows and sheep have been utilised, now they are employing two Exmoor ponies. Exmoor ponies are great grazers and are used frequently for conservation grazing schemes.

As welcome as they are, it's great to see some grazing, I fear it will take more than two ponies to get the Budge fields into suitable condition for lapwings by April. Hopefully, this is just the advance party.

After an aborted ringing session at Ellington Pond (due to the strengthening cold NW) I headed to Druridge for an afternoon visit. The cold NW was still blowing and there were a few drops of rain.

Admiring our coppicing work from Friday (I am still in pain!), a flock of siskins passed through, even feeding on some of the cut material, among them were a few tits, chaffinches and a stonking male brambling - see, it's only been cut for two days and its already bringing the birds in!

The Budge fields are still holding decent numbers of wildfowl, shoveler and gadwall now number 6 and there were two snipe, the first since the snows in December.

Spring is here, the coltsfoot are in flower and I clocked the first summer visitors arriving back today, well flying through, four lesser black-backed gulls moving north offshore.

Coltsfoot is odd in the plant world in that it produces its flowers before it grows its leaves. It is also used for treating coughs, so if you're feeling a bit wheezy, you know where to find it!


On Druridge Lane, the little owl was still in its usual spot.

This is my first, and probably last, blog post sent from my mobile phone. I downloaded the blogger app so thought i'd give it whirl.

We were coppicing at druridge today for 6 solid hours, i'm knackered now, not used to hard work these days. We got quite a bit done, just north of the path to the budge screen. So when you hear singing whitethroats there this spring.....

I managed two year ticks whilst fuelling the chainsaw, 4 barnacles over with some pink-feets and a single skylark heading north. 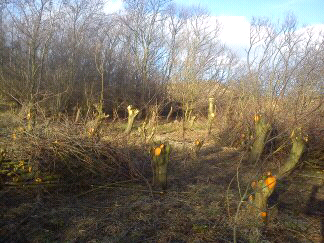 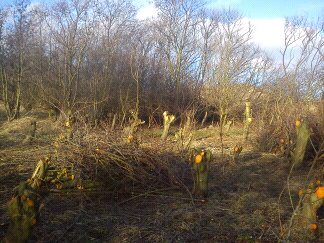 The National Trust had a group of volunteer in coppicing the trees at Druridge recently. Well I say coppicing, to be honest its more like a cross between coppicing and pollarding - a hybrid technique.


The reason we do this semi-pollard/coppice thing is two-fold. Firstly, it stops the rabbits eating the regrowth, secondly, it provides safe nesting 'cups' for birds amongst the new stems, clear of the ground.

It looks brutal at first, all of the trees hacked down, but this is essential work. My territory mapping exercise last breeding season proved this. The number of species and number of territories was higher in the recently coppiced areas. The strip of trees and bushes at Druridge is primarily alder and hawthorn, with ash, willow and some whitebeam with other oddities.

If left, the alders would get quite high, the only birds that would nest would be magpies and crows, the height would further limit the area of the Budge fields for breeding waders. I'm off tomorrow, so were going down to Druridge to a bit more coppicing, it grows so quickly once it is cut, we can't get round it all quick enough!

Alder is quite pale colour straight after it is cut, but it soon turns this lovely orange colour. 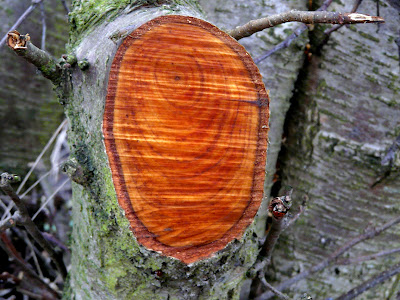 Today wasn't so grey, by far the warmest day of the year so far. My work took me to Seahouses where the drake eiders are looking rather resplendent in their breeding plumage!

I went to Druridge yesterday, it was cold and damp and grey and miserable, I left in a similar mood.

A shelduck has appeared, mid February, bang on cue!

I wish it was March

Seeing the National Trust with volunteers coppicing  trees lightened my heart, good to see this vital work getting done, I hope to do some myself next weekend...the Big Society in action!

Less wildfowl on the Budge fields than of late, but still reasonable numbers of wigeon (226) and teal (118). A pair of pintail still remain, the male looking very resplendent with his long tail feather sticking into the air, ten shoveler and two whooper swans were also notable.

36 curlew and 35 lapwing were on the adjacent fields, six stock doves were in among the curlew which were nice to see.

I wasn't brave enough to check out the sea, I was freezing so headed home for a bacon butty.
Posted by Ipin at 22:30 2 comments:

Not ideal weather conditions for birding today, but I had a day off and was starting to get cabin-fever after yesterdays rain kept me indoors.

So a lunchtime visit to Druridge was attempted, it started off quite nice, if a little windy, watching a flock of goldfinch in the bushes, hoping to see Alan Tillmouth's brambling from last week. A flock of 16 siskin in the alders were a year-tick.

The Budge Fields were 'lifting' with wildfowl, the pintail count now up to five and a couple of whooper swans there too. Wigeon was most numerous species with at least 350 present and about 250 teal.

You could have surfed on some of the waves on the big pool, but was brown like the chocolate lake Augustus Gloop fell into in Charlie and the Chocolate Factory, so it might not have been pleasant. The sky began to darken from the north, we beat a hasty to retreat back to the car, before a squally shower of rain/hail/sleet hit us.

We're off to the Cheviots tomorrow to finish our winter atlas work, hope it hasn't snowed too much up there!