Jay has been seen on the patch before, but not by me. A bird that has so far alluded me on the patch, it's nice to add it to the list.

We were ringing this morning, between net rounds I was having a chat to Dave and Roger when they both saw the bird flying over. I saw it, with my naked eye, but had no bins, luckily Dave passed me his and I saw it well before it disappeared over the top of the bushes heading north.

Jay isn't a bird you see very often on the coastal plain and even less so right down on the shore. It's addition to my patch list takes me to 230 and is the second new bird for the list this year after my spring nightjar.

Ringing was quite slow, despite the arrival of birds during the week. Though after the huge arrival of yellow-browed warblers to the east coast, we predicted we might catch one this morning, we caught two.


After the arrival of the yellow-browed warblers on Wednesday, I was back on the patch on Thursday morning and saw three, probably four, in the bushes. Mike Carr saw one at High Chibburn Farm at the same time, so there were at least five on the patch on Thursday. We also had siskin and redpoll fly over but the redwings that arrived on Tuesday and Wednesday had moved on.

Last night, I had a very brief visit and a single bird skulked in the thick hawthorn by the Budge screen, but that was a far as I got.

Invasion of the yellow brows

The word unprecedented is a very overused word in my opinion, especially in the popular press, by politicians and corporate bollock-speak. So I tend not to use it, but today warrants the use of the word 'unprecedented'.

The massive arrival of yellow-browed warblers that occurred today in Northumberland has never been seen before on this scale. At least 51 have been recorded in the County today with an amazing 17 on Holy Island, ten at St. Mary's and nine on the Farne's. Druridge didn't miss out on the action either.

I had a quick pre-work bash of the bushes, but didn't find any yellow-browed warblers. There were a few chiffchaffs, a handful of redwings (first of the autumn), coal tit (first of the year) and other bits and bobs.

Working in Amble today meant I could have an extended late lunch-break and have another go. There was a heavy mizzle, verging on light-rain, when I arrived and I was downhearted. I read a tweet from young Jack at Whitley Bay which motivated me, it said that down at St. Mary's new birds were still arriving.

I came across a small tit flock, deep in the bushes. The flock had attracted not one, but two, yellow browed warblers, which moved along with the tits as they went roving north. I walked on and found another (or one of the previous birds) in one of our net-rides. It was three feet from me in alder, I had no camera because of the rain - gutted.

Later, I found another bird; right at the northern end of the bushes. So there were at least three, maybe four yellow-brows, just at Druridge (and I hadn't checked the whole patch)

If this little fall of eastern delights had happened over the weekend, when many more observers would be out, we might have topped a three-figure count I reckon.

On Monday evening I saw two little egrets on the Budge Fields.

We put some nets up on Saturday morning but ringing was very slow and by midday we hadn't reached double figures. We caught our first goldcrest of the autumn and a couple of warblers, goldfinches, a blackbird and blue tit.


There seemed to be a few birds int he bushes, but maybe it looked as though there were more than there actually was when the birds gathered on the eastern edge to make the most of the warm sunshine?

This spotted flycatcher was the star amongst the whitethroats, blackcaps, chiffchaffs and willow warblers. A great-spotted woodpeckers was heard but not seen and a pair of kestrels and a sparrowhawk were the raptor highlights.

I had a quick look on the sea in the evening, there were lots of red-throated divers in the bay in varying plumages.

There was little more life on the big pool, although a great-crested grebe was nice to see - a bit of a scarcity at Druridge in recent years.

This little grebe was amusing, it seemed determined to be sat on a rock, trying three before it finally settled on one it liked.Quite odd to a little grebe perched out like this.


The 'Indian summer' the newspapers are heralding hadn't brought many butterflies out bu there were lots of common darters. A good chance to practice my dragonfly photography. 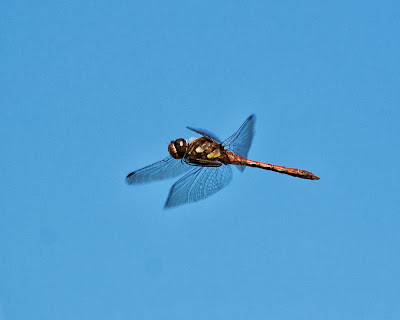 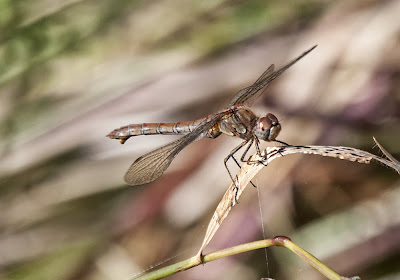 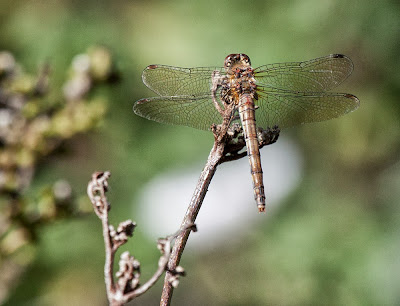 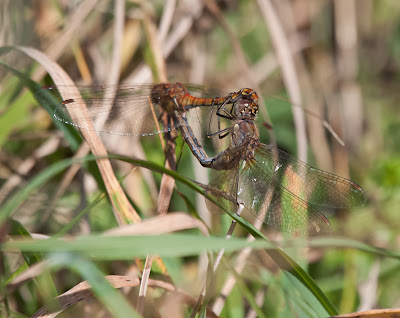 I wasn't down at Druridge in time to see, or take part in, the mass skinnydip, but you can read all about it here

Saturday was like the calm before the storm. I should've had some nets up on Saturday morning, but didn't. I had a couple of nets up on Friday evening and only caught a single wren, the bushes were empty. Which didn't inspire me to bust-a-gut on Saturday.

I had a look around the patch at lunchtime. The bushes were still quiet. A couple of chiffs on the path to the hides with the tit flock was a highlight. There were no waders at all on the big pool and only a couple of curlews on the Budge (that were visible). Lots of moorhens though, at least 15.
I had a scout around the bushes to the north and a quick look offshore. A harbour porpoise loitered just offshore and there were 14 sanderling on the beach.

I returned for last-gap seawatch before dusk. 1820-1920 after reports of skuas and sabine's gulls further south. It started quietly. Plenty of gannets on the horizon and few kitti's.

Then I got onto a sooty shearwater, about half way out, flying north. It's been a good autumn so far for sooties, so about time I connected with one. I had another sooty north and a distant skua going south which remained other unidentified.

The light got the better of me by twenty-past-seven, so I headed home, happy with my soooties.

The storm that was forecasted for today didn't seem as bad as the weathermen predicted, though it was very windy. So no birding for me, instead I spent the day preserving garden and foraged produce.

I was working in Alnmouth today, a stressful day, cooped up indoors. When I left Alnmouth there was stiff northerly wind, so I decided an hours seawatching at Druridge would be worth a go.

I got down there for ten-past-five and it was really quiet. Other than long strings of gannets on the horizon and few groups of kittiwakes, I had eight pale-bellied brents north, a flock of wigeon, a red-throated diver and a handful of fulmar......that was it. I checked my phone for the time and twitter updates and decided to call it a day, but I had a quick scan south, just in case I had missed anything and got onto a really close skua heading north, so close it was a bins job as it went by. It was a stunning juvenile long-tailed skua in amazing light.

I've not seen a long-tailed skua on the patch since before 2008, at least. It made a brilliant end to an otherwise disappointing seawatch.

This weekend was our village show, so yesterday was mostly spent 'buffing my veg' and baking scones and cakes. I was like a cross between Alan Titchmarsh and Paul Hollywood!

I snook out yesterday afternoon, after the veg and baking was in the hands of the judges. The predicted 'fall' conditions hadn't happened and the bushes were quiet. I checked the big pools for waders, with East Chevington hosting white rumped, pec and curlew sands, there had to be a good wader at Druridge. There wasn't.

This curlew was very obliging.

There was a few migrant passerines in the bushes, willow warbler, whitethroat, sedge warbler and blackcap.

Today was show dominated, so I didn't make it to Druridge until after 3pm. Dave Elliott had tipped me off about whinchats and a cuckoo at Druridge. I saw both the whinchats which were associating with a family of stonechats but not nearly as obliging. Two off the young stonechats looked like they weren't long out of the nest - third broods which I have missed?

The cuckoo flew from the dunes into the bushes. It is very late for a cuckoo, presumably a late, locally bred individual?

A bit of an anti-climax

Druridge this morning was a bit of an anti-climax after having spent the last nine days in Tarifa for migration. I'll put some more photos on Ipin's Birding Trips and Facebook soon but here are a couple of honey buzzards shots, I watched over 3,000 come in to roost in two consecutive evenings. 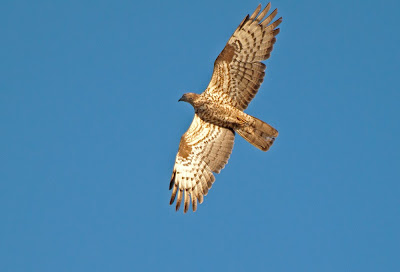 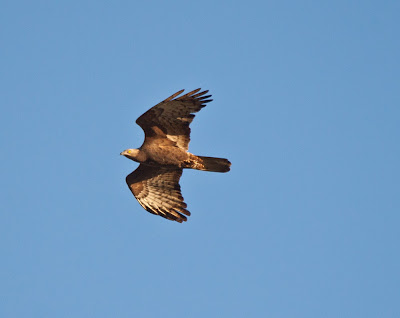 So, white-rumped, pectoral and curlew sandpipers all up the coast at East Chveington, there had to be at least on tasty wader at Druridge this morning. If there was I couldn't find it. A single whimbrel with the curlews and a fly-through, calling, green sandpiper was the best that I could do.

There seemed to be a few common migrants in the bushes, sedge, reed and willow warbler were noted. There were also a few speckled wood butterflies enjoying the autumn sunshine, like this one on brambles.