With the wind howling and light mizzle falling at home this morning, it would have been very easy to say "Sod it", not go down to the patch and find something better to fill my day. After all the likelihood of a year-tick was slim.

But no, I thought, it's your last chance, get yersel out. I decided on grand tour of the patch, starting at the bushes then down to the Oddie hide and a good chinwag with Ian Douglas. Then I headed inland, for the Preceptory. I sneaked in, walking over some fresh barn owl pellets and caught a little owl sneaking out from one of the chimney stacks, it flew out to perch on the fence. A very unexpected year-tick.

Ian Douglas and I had just been discussing how poor an owl year it was.

My route then took me down to the farm, where there was a decent flock of chaffinches but nothing else among them and back towards the cottages.

A final quick scan of the Budge fields revealed nothing new and the rain had started to lash down, so I headed for home without my usual look at the sea.

So the year ended on a bit of a highlight with my 171st species for the patch for the year, the best year I've had for at least the last six. I can't put my finger on why the year has been so good. I eventually got most of the common waders, despite passage being slack, there was no real 'falls' of the autumn so I missed stuff like redstart. Seawatching was canny at times so that would have helped, but we caught and ringed less birds than any previous year.. All in all though, an above average year.

The greatest highlight was catching and ringing a breeding pair of marsh warblers and then seeing fledged young later. We had to keep this to ourselves at the time for obvious reasons. If accepted, this will be the first confirmed breeding record for the County.

The first was nightjar back in May, which you can read about here. Nighjtar was a species I hadn't even considered might occur at Druridge.

The second species to be added was Jay. Long awaited and I didn't even find it myself, but thanks to Roger and Dave.

The final species was belter, not found by me, but by Martin Kitching. Subalpine warbler, later confirmed as being of the 'eastern' race and hopefully split very soon.

I've really enjoyed my year on the patch again. I'll not be starting over again tomorrow as I am off to West Bromwich Albion. Maybe on the 2nd....

Thanks for reading over the last year and all the best for 2014!

The end is nigh

The end of another year on the patch approaches. I don't know why we birders concentrate on our 'year lists' as much as we do. It is just another date in the calendar after all and doesn't really relate to natural seasons at all.

For me, a patch year list gives me a new challenge, an impetus to get off my arse in January and February and go bird watching on the patch. So regularly starting a 'new list' to keep giving me something to aim for needs a start and end date, so I guess January 1st makes sense.

Another way to keep interest fresh would be to change patches every few years. This would be interesting, but I think for it to work, I would have to move house, so that my new patch was closer home. I have mulled over the thought of a on-foot-from-home patch, a triangle between Ellington, the Lyne Burn and Cresswell. It would certainly have the potential to turn up new birds but I think the people and the activities they get up to on this patch puts me off, it would be even be worse than Druridge.

So for 2014 at least, I will stick with what I've got. I've signed up for next years patchwork challenge now, so I may as well.

So back to this year, even with likelihood of adding anything to my year list diminishing, so had yesterday's storm, so I had a mooch around the patch. Nothing stirred in the bushes other than the goldfinch flock and a small roving tick flock and there was nothing new on the Budge fields On the big pool, there were still two long-tailed ducks and a 'female type' common scoter.

Offshore, there were lots of red-throated divers again, easily 45 in the bay. As I scanned through them, a bigger diver was its own and it wasn't a great northern, it was a black-throated. Not a common bird at all at Druridge, but there has been a few around this autumn, there was even one on East Chevington this morning. This is my first patch black-throat since 2010 and a welcome, if late, addition to the year list. A further scan also turned up a great northern further south and a harbour porpoise.

So, they year list rockets to 170, my best total in at least the last seven years. Not much chance of another new bird this year....

This evening I went to East Chevington for the starling murmuration. It was nearly 3.34pm before things got going with a small group of a couple of hundred birds. Small flocks seemed to arrive to join them from all directions and by 4pm there were thousands. It was very windy but the display was still excellent.

Word is out about the murmuration and there was quite a crowd tonight. I took this video, which is just some of the birds. Might try some video on the SLR if the wind drops.

As the weather has been so awful today and any attempt at birding would have been pointless, I spent my day writing-up the second part of our trip to Thailand (last December/January) onto my birding trips blog. 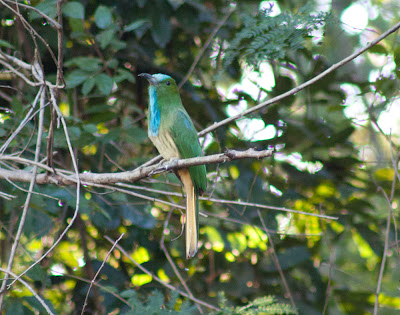 You can read it here http://ipinsbirdingtrips.blogspot.co.uk/

If tomorrow is as bad as today, I might get the last bit done. Then I've only got Catalunya and Tarifa to do and I'll be caught up :-)

Today was WeBS count day and it through up a couple of surprises.

The first surprise was a black-tailed godwit amongst the curlews, a further scan revealed a second blackwit. Black-tailed godwits are really uncommon at Druridge in winter. The only other winter record in my database was on 2nd January 2012.

Wildfowl numbers on the Budge fields are picking up with 152 wigeon, 43 teal and 13 shoveler. Lapwing numbered 237 and curlew 46.

On the big pool, the common scoter (female/first winter type) reported on Birdguides during the week was still present. A first record of this species for the inland WeBS count.

I popped back to Druridge at dusk. The starling murmuration at East Chevington was visible with the naked eye. It's a pretty impressive site, numbering thousands of birds. The birds finally went into roost just before 4pm, so if you get the chance, head up there for about 3.30 for some great views.

Turned out all white

At lunchtime today , I was sat in the Oddie hide with Graeme Bowman and Les Robson contemplating heading home to watch the Newcastle match and eat last nights cold pizza when Graeme got a muffled call about an ivory gull at Seahouses.

We were soon on our way and this is what greeted us when we arrived at the golf course. 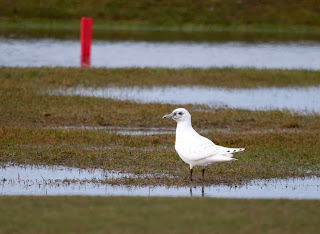 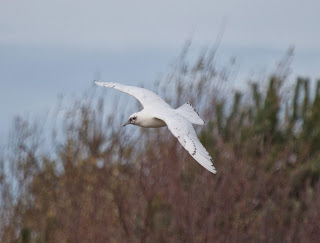 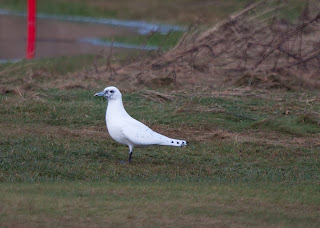 A stunning juvenile ivory gull, which showed incredibly well, thankfully the course was too flooded for it to be bothered by golfers.

The assembled crowd watched as it took off and headed south and almost in unison shouted 'there's two of them' with various expletives rightly added. They called to each other and continued south together. Amazing. Congratulations to Gary Woodburn on another great find.

As regular readers of this tosh will know, I rarely twitch, because when I do I don't see the bird, so it nice to twitch a bird and see two!

The 'Seahouses-two' were relocated on the beach at Annstead and everyone enjoyed further views of them on the rocks before the tide pushed them off and they flew off north.

A new bird for me and a lot of the Northumbrian birders there, the last being in Seahouses in 1979. This takes my county list to 311.

There was little doing at Druridge before I left. There wasn't a bird on the sea, all the divers from last week have gone (tell a lie, there was a single shag). On the big pool there were two long-tailed ducks.

Outside of the patch at Hemscotthill links the finch flock had about 40 twite among it. I scanned them for colour-rings without success. There were tree sparrows, reed buntings and strangely a rock pipit amongst the linnets, goldfinches, chaffinches and twite.

I would love get access to the Hemscothill Links to woosh that finch flock.
Posted by Ipin at 19:21 No comments:

Having only added one new species to patch list in November and the Patchwork Challenge coastal North mini-league hotting up at the top, I'm going to have to get down to the patch more often in December. The countdown to end of the year has begun.

My visit started with a bit of drama. A sheep in the paddock south of the plantation had got itself onto its back and couldn't get back onto its feet. As much as I detest sheep (they are the stupidest of creatures), I couldn't see the poor thing suffer, so I went to its rescue. My good deed for the day done.

Sheep rescued, I went to the north end where there about 1200 pink-footed geese in the fields west of the haul road. The weedy areas of the dunes held three stonechats and a handful of linnets, dunnocks, goldfinch and reed buntings.


On the sea, there were an impressive 38 red-throated divers and three red-breasted mergansers. 16 sanderlings were pushed back and forward along the beach by dog walkers.

Talking of dog-walkers. When I got to the Budge screen hide, one of the lazy bastards had left a full bag of stinking dog-shit on the seat of the hide. And then, I trod in a heap by my car. Druridge is becoming a massive dogs-toilet and I am getting fed-up with it.

Wildfowl numbers are picking up on the Budge fields with 90-100 of teal and wigeon. Two long-tailed ducks were on the big pool.
Posted by Ipin at 22:32 1 comment: