A patch tick today - not a bird but a new dragonfly for the patch. Broad-bodied Chaser. The species had been reported a couple of times earlier in the week so I was pleased to catch up with them today.

I saw the female first, sat motionless on a dead stick.

A few minutes later a male flew in from somewhere, perched briefly and was off.

There were lots of damselflies on the wing today, all Blue-tailed and Common Blue that I could see. 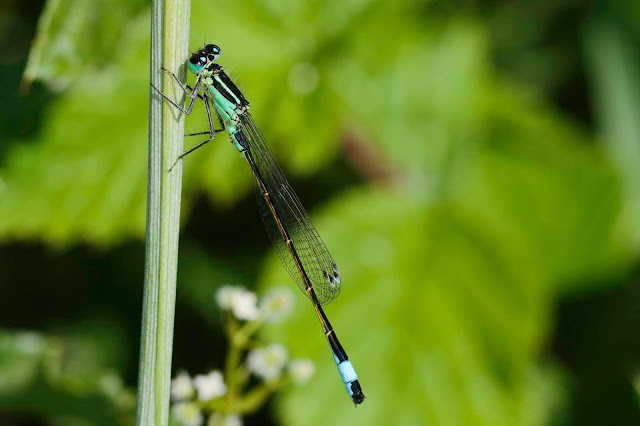 A few hovers were out on the Hemlock Water Dropwort and along the path.

On the Budge fields, a single summer-plumaged Spotted Redshank, Little Ringed Plover and Dunlin were noteworthy. No sign of the two Spoonbill reported earlier. Offshore the scoter flock is starting to build with c120 in the Bay.
Posted by Ipin at 22:51 1 comment:

I was on holiday in northern Scotland for the first two weeks of June and it's taken me a while to find the time to write a blog post. The garden was top priority, work has been hectic and on light evenings I'd rather be out than sat in front of the computer.

I missed some good 'County birds' whilst I was away - Red-necked Stint and Pacific Swift. I did catch up with the American Golden Plover at Cresswell on the night we got back, but missed it on the patch on the Tuesday when it was last seen. A new bird for the patch taking the patch list to 271.

I've not had that much time for birding but I've been down to the patch a few times since we got back. I've added a few new birds to the year list including Cuckoo, Roseate Tern, Manx Shearwater, Bonxie, Little Egret and Wood Sandpiper. The first birds I saw on my return the two Ruddy Shelducks that had been on the patch the whole time I was away.

On Thursday morning I did my territory mapping exercise. harder work at this time of year with warbler silent, feeding young. Some are on second-broods and have started to sing again. It was a lovely calm morning and unlike the previous Tuesday no campers, motorhomes or 'drunk miscreants'! If only every day was like that.

I've been pondering buying a new pair of binoculars for some time. My Swarovski 8.5x42 ELs are 21 years old now, whilst optically fine, they are big and have some action. Time for a change.

The new Swarovski NL Pure 10x32s caught my eye, but a discussion with Neil Osborne and others led me to testing out the Zeiss Victory SF 10x32s for a weekend. Zeiss do a brilliant 'try before you buy' deal whereby they send you the bins via courier for a weekend and then collect them again the next week. Brilliant!

I enjoyed using them, much smaller and lighter than my ELs and 10x as opposed to 8.5x that I'm used to made a difference. The field of view was amazing and a huge amount of light came in for 10x bins. I was impressed.

I had to try out the Swaros too. Swarovski don't do a try before you buy deal, but London Camera Exchange in Gosforth got a pair in for me to try, which I did this morning. Luckily they also has a pair of the Zeiss in too so I could try them side-by-side (okay only in Gosforth High Street, but the light was testing).

Clarity and light: - on par, Swarovski slightly edging it

Close focusing: - Zeiss were a couple of cm closer but not much in it.

Weight: - Zeiss slightly lighter but not enough to be noticeable in use

Use and feel:  - this is where the big difference was for me - the Swarovski bins felt much more comfortable to use, there were places for both my thumbs whereas the Zeiss felt slightly awkward. When testing the Zeiss at home, I couldn't quite get the eyecup relief right and I found the same today. I found the focusing wheel a bit stiff at first on the Swaros (almost too light on the Zeiss) but it loosened with use, probably just because they were new. Now this is an odd thing to say - the Swarovski's felt 'better quality', the Zeiss feeling a bit 'cheap' (they're not!).

Binoculars are a personal thing, what suits one person doesn't suit another. Janet can't get away with my Els for instance. That's why when people ask for advice about a pair of bins, I always tell them to try some out against each other if possible.

In the end,  it was the ergonomics of the Swarovski's that won it for me, they just felt 'right'.

The Zeiss are excellent and I would recommend trying them. Since buying the Swarovski's I've heard some negative stories about the armoring deteriorating - which isn't good considering the price of them! Time will tell I guess.

So, I'm the proud owner of a new pair of bins. The old Swaros resigned to a spare pair/house bins.