Not much to report from Druridge tonight. 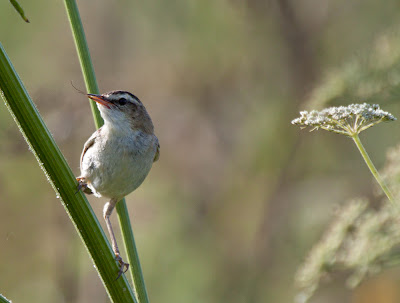 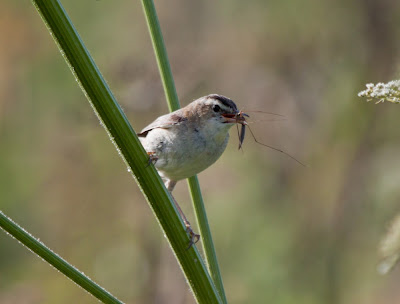 Otherwise an arctic skua was offshore, an adult male and juvenile marsh harrier were hunting (flushing 5 snipe) and the common gull roost on the beach is starting to build up.
Posted by Ipin at 21:53 No comments:

As regular readers of this drivel will know, I do like a stonechat.

This probably because I am crap photographer and they make it easier for me. A pair are of these fantastic birds are second-brooding int he dunes at Druridge and I couldn't resist a shot or two.


Nothing much else of note tonight, 12 curlew on the Budge fields some scoters offshore and a few sanderlings on the beach.

I should have spent this weekend at a wedding do in London, so all three visits to the patch and a 'County-tick' at Alnmouth were all a bonus.

Saturday started with a ringing session at Druridge. With only half of the usual nets up, we didn't catch many birds. Warblers dominated the catch again with whitethroat, reed warbler, sedge warbler, chiffchaff and a family party of blackcaps, the amount of whitethroats we've caught this year is unprecedented and we are doing well for reed warblers to.

The female mandarin duck is still on the big pools and two drake pochard were unusual.

During the ringing session, news broke of a spotted sandpiper at Foxton. So as soon as we packed the nets away we headed up there for a look. A fine 'spotted' adult gave the assembled twitch good views as it pottered about on the banks of the River Aln. A 'county-tick' for, taking my county (low) list to 309.

An brief evening visit to Druridge didn't produce much, the highlight was a dark-phase arctic skua pursuing a common tern well inland over the big pool.

Sunday was a day of two-halves. The day began with strong winds and heavy rain, by tea-time it was warm and sunny but a bit breezy. So an afternoon visit to the patch. At long-last, I found a common sandpiper on the edge of the big pool a very belated year-tick. There were still two little gulls on the big pool and a family of yellow wagtails were in front of the hide.

I'm struggling for waders this year. What mud there is at Druridge has either vegetated over or is hidden behind massive clumps of rush. I am relying on the regular passage of marsh harriers to flush something up.

I think a lot of the warblers are second-brooding at the moment, hence our low ringing catch and general lack of activity. These sedge warblers are certainly feeding a second brood.

Some quality birding at Druridge

Another busy weekend, but managing to squeeze in some quality birding at Druridge.

The weekend started with a quick visit to the patch on Friday evening and the first record in the notebook was a male marsh harrier, trying unsuccessfully, to hunt a family party of pheasants along the bunds. Highlight of the evening came a bit later, on the beach.

I noticed a single tern had landed just in front of me on the beach. A glance through the bins showed it to be juvenile, but it had a very dark head. Through the scope it was quickly id'd as a juvenile black tern, showing a lot of black on the crown and extensively down the ear-coverts. It also had the black smudgy mark on the side of the breast from the 'collar'. I phoned Dave Elliott and it remained on the beach whilst I did. I then ran down to the car for the camera and ran back tot he dune, amazingly (given the number of nearby dog walkers) it was still there. BUT, just as I walked down the front of the dune to try and sneak up on it, a red-setter type crazy dog got to it first and I saw it last heading over the sea towards Cresswell. I did get a photo of the canine offender.

I thought the middle of July was too early for juvenile, but seemingly not. I have had juvenile black terns on the beach at Druridge in August previously. This is my first record since 2011 and only my second in the last six years.

The huge common scoter flock of midweek has dispersed, this flock of 400 were just offshore  and there were at least three drake velvet scoter in with them. A steady passage of manx shearwaters was noted without about 80 north in 1 hr 30mins.

Today was WeBS count day and some more quality birding. I was a bit tardy in getting to the patch after going to see some bands in Newcastle, managing an 1130 start for a seawatch. I had no-doubt missed the best seawatching, but in an hour or so managed a single bonxie, two arctic skua, 40+ manx shearwater and c200 common scoter.

Also around the pools were three or more yellow wagtails and a female white wag. These swallows were very photogenic in front of the little hide.

July last year saw Mandarin duck added to the Druridge list and today I saw my second Druridge Mandarin. Are they becoming more common or is this the same bird coming back?

Like last year, it was a very dull female type bird. Last year I got excited because it was full patch tick, this year I failed to conjure up much enthusiasm. Bizarrely, it is worth two points on the Patch competition, one more than hobby!

A first-summer little gull is still hanging about and looks particularly scruffy.

Offshore, there are still about 1300 scoters but the flock was fragmented and distant in poor visibility. A few sanderlings were still on the shore but less than last night.

Soon after, chaos descended on Druridge with lots of brats getting out of lots of cars. Time to leave.

The weekend began with an evening seawatch from the dunes. About 100 manx shearwaters/hour flew north, virtually a constant stream of them, there were also 3 arctic skuas in the bay and at least five drake velvet scoters in the scoter flock. An adult female cuckoo was int eh dunes, attended by several meadow pipits.

As I made my way back to the car, the common terns by the big pools went mental at something behind the trees, then the swallows joined in. The reason for the commotion soon became a apparent as an adult hobby glided over the top trees and over my head off over the dunes, other than a slight northerly change of direction in headed straight for the sea,, before disappearing over the dune ridge.

If only I had had my new lens (it arrives tomorrow or Tuesday) I could have had a great shot of it as it flew over my head.

I now regard hobby as annual at Druridge. Last year there was a regular bird harassing the hirrundine flock for a few evenings in a row and they have been recorded on the patch every year for the last four years. Hopefully this one will stick around.

I tried a ringing session this morning. At 6.30am there was fine mizzly sea fret, which was quite wetting, so I did some birding for a while seeing Friday's cuckoo again and some warbler activity. The fret decreased a bit so I put a few nets up, but only caught eight birds:

After ringing we went to check on the barn owls at the farm. Sadly, they have failed this year, though an adult was still in the barn.

This evening, I took a leaf out of ADMc book and got out on my bike and headed down to Druridge. From the Oddie hide there were three adult scaup (two drakes and a duck), just in front of the hide (again no lens thus no camera). There were also three little gulls and a juvenile yellow wagtail.Seemingly I had just missed three otters playing and scaring away the ducks.

Offshore, the scoter flock had probably doubled in size since the morning and now held upwards of 1000 birds. They were just too distance to scan through evening heat -haze. There has to be a surfy out there somewhere.

Patch Competition Score 172 (bizarrely Scaup is worth two points whilst hobby brings in a measly one point!)
Posted by Ipin at 23:42 No comments:

Now the Bridled Tern has almost certainly left Druridge Bay (it was seen flying south past Flamborough on Monday), life can return to something like normal and my stress levels have also gone down. I am still peed off that I didn't manage to get such a fantastic bird on the patch (and that Mr Elliott did!).

A cold Southeasterly blew at Druridge tonight, so I had a quick evening seawatch. The scoter flock in the bay is building up, with a bout 350 birds in one flock tonight. I scanned it and picked out at least three drake velvet scoters but nothing rarer. This is a good time for surfy to turn up or even something more scarce so I'll continue to scan the flock whilst I can.

Great views of an adult female cuckoo in the dunes was tonight's highlight though. It sat perched in various bushes, always attended by a couple of meadow pipits. It was still there when I left as the light faded.

I've spent much of this weekend perched on the dunes at Druridge scanning the sea, trying to add a very special tern tot he patch list.

I have seen the bridled tern, that terned (geddit!) up on Inner Farne last Monday. I was on a 6am boat on Tuesday morning to see it. But as soon as it re-located to Druridge Bay, there was a really possibility that  I could get it on the patch.

Dave Elliott did. Jamming it from the dunes at Druridge. I've not been as lucky and despite over 15 hours of searching it has eluded me.

Looking for a single bird in miles of sea, on your own with no help, is always going to be tricky. I did see some nice birds whilst I searched for the rarity including; stacks of manx shearwaters, double figures of red-throated diver, four or five Arctic skuas, three drake velvet scoters (tonight), great-crested grebe, several roseate terns and also tonight, two adult summer plumaged little gulls flying north.

Also tonight a minke whale moved south through the bay (thanks to Dave Dack for the tip-off). The tern could still be around (last seen today at Cresswell Pond at 15:20) so there's still a chance.


We also did some ringing this morning. it was perfect ringing conditions this morning. Barely any wind and overcast for much of the morning. Ringing was dominated by juvenile warblers, which is great. We caught 27 new birds and three retraps which is excellent for July.

I am struggling to keep up with blog posts at the moment and with a knackered lens I've got no nice photos to put on the blog either (I might go and photograph butterflies, bugs and beasties this weekend)

Yesterday was spent mostly on Inner Farne. At 6.30 am I was enjoying fantastic views of Bridled Tern at 6.30pm I wasn't, I was back on Inner Farne, soaked through and miserable, not seeing the tern.

It was much warmer at Druridge this evening, but dull by comparison on the bird front. I ringed a brood of swallows and then had a look on the sea. A few Manx shearwaters flew north  - 25 in 1 hour - and an arctic skua was my first of the year.

'Over the road' Two marsh harriers were passing through.

DIY and gardening have taken a bit of  a priority this week, hence the lack of birding and blog activity. Hopefully will be ringing this weekend so things should improve on both counts.