You may remember this post from April? It was about me not seeing a red-rumped swallow and red kite on the patch because I was at work.

Well, it happened again yesterday. Stuck at work in a meeting when news comes through of another red-rumped swallow at Druridge and then it gets worse... there were two! Worse still, straight after my meeting I have to go to an evening event in Bamburgh and don't get home until after dark. So no chance!

Meanwhile, lots of birders are enjoying crippling views of the birds over the path to the Oddie hide and getting some great photos to boot.

I have had some luck this week, I caught up with a few good birds on the patch. On 8th I managed to see jack snipe and a channel wagtail from the little hide at the same time. The jack snipe was just in front of the hide and I managed to get this nice video of it bobbing along.


The Channel wagtail was close enough for a photo too. This was my second 'Channel' wagtail at Druridge, the previous one was on 18th May 2010 which you can see here. There were also six yellow wags and five ruff.

On Friday, I was working at home when a message came through about a citrine wagtail just down the road at Lynemouth flash - I could be there in five minutes. So a midday lunch break was taken and I was soon enjoying close views of a stunning citrine wagtail. Only my second ever in Northumberland and the best I've seen away from the breeding areas in Poland. 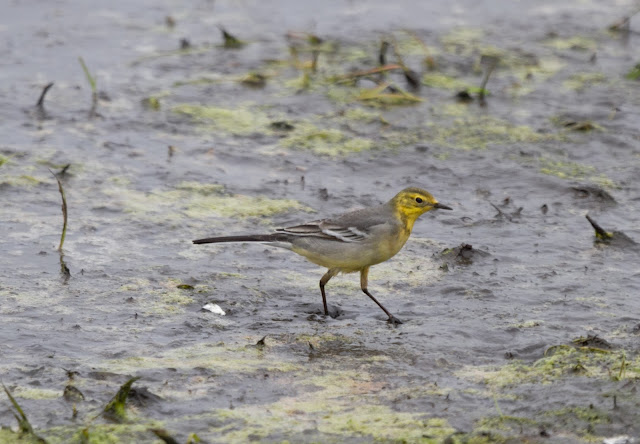 We popped into Druridge on our way home where there were two avocet and a drake garganey on the Budge fields.

On Saturday the drake garganey was still present with a wood sandpiper. Reed warblers were back in the little reed bed and a long-eared owl flew across the Budge fields. Offshore, I saw my first puffins of 2017.

Sunday was WeBS day - the wood sandpiper was still there with two black-tailed godwit and a nice male ruff.

On Sunday evening it was obvious that Cresswell barn owl botherers had decamped to Druridge in hope of long-eared owl photos - there wasn't a sole at Cresswell. It was nice to bump into Cain and Heather.

Tonight, there were plenty of swifts and hirundines but no red-rumped swallows. There is a lapwing on eggs on the budge fields, she got disturbed by the arrival of a heron and I managed to get this video of her returning to her nest.

Life has been pretty hectic lately, so much so I haven't been able to update my blog. Since the last post I finally caught up with a patch RING OUZEL on Saturday . The bird had been reported two days earlier by a visiting birder in the dunes to the north , I had two brief chances to look for it on the Thursday but couldn't find it. After another couple of hours on the Friday I finally found it in what remains of the Druridge bushes (the cows have hammered them lately). No photos unfortunately as it was a skulker.

On 10th April a spoonbill arrived and was joined later by a second bird.

Since then I have been visiting the patch whenever I get a second. As I was away to Jersey for a long weekend last week, Saturday brought a flurry of year ticks. First off was this reeling grasshopper warbler - so much for being a skulking species, this one hadn't read the rulebook, it's been singing from this fence for three days!


It was amazing to watch at close hand, it's entire body vibrating when it was reeling.

Next up was a drake green-winged teal on the Budge fields. This bird had been around for a day or two, so it was nice to catch up with it - mind it took some finding! Other highlights on the Budge fields were three to four ruff, an amazing 28 whimbrel - which flew off when the cows arrived, a stunning brick-red bar-tailed godwit and a few blackwits. Also new for the year was sedge warbler, little owl and common tern.


On Sunday I had a quick around through the dunes to the north looking for migrants - it was very windy but a count of 15-20 wheatear in the grazed dunes was impressive.

This poor hedgehog must have investigated the pipe socket that is by the turning circle and drowned itself or decided it couldn't face a bank holiday weekend at Druridge and did itself in.

Today the wind was a bit lighter but still out of the east making it feel cold. I headed for the Budge screen and bumped into Peter Williams of Patchwork Challenge fame. Peter picked out the wood sandpiper that arrived yesterday. Also of note were at least five ruff, two of which were starting to look a bit dapper, a handful of blackwit and a single dunlin. No sign of the green-winger.

I mentioned cows earlier - four have arrived on the Budge fields and the timing couldn't be better for the breeding and passage waders so 'Well done' to NWT. (seemingly, according to the local farmer they had been released last week but had escaped - anyway it is good to see them.

I've got another couple of busy weeks ahead of me but hopefully I'll find time for a visit to the patch.
Posted by Ipin at 22:51 1 comment: