Friday - my first CBC visit of 2011. I've decided to try to continue doing the territory mapping exercise adapted from the CBC methodology again this year, so Friday morning was Visit A. In terms of breeding birds, skylarks and meadow pipits are certainly back in good numbers with at least 30 of the latter in the dunes. Not much happening on the migrant front though, a single sand martin was a welcome sight.

Highlight of the morning went to a pair of water rails. Mr water rail was in the reeds squealing for all he was worth whilst she pottered around the ditch non-plussed. Another positive sight was seeing tree sparrows hanging about by our boxes, fingers crossed they use them this year.

Today, after stopping briefly at Cresswell Pond to shamefully twitch a drake American wigeon (it is ages since I've seen one), we had a couple of hours at Druridge in the warm spring sunshine. The same sunshine had brought out my first two butterflies of the year, a large white and a very shabby looking peacock.

No new migrants to report, a look offshore for sandwich terns and puffins drew a blank, sic red-breasted mergs and 14 red-throated divers were good counts. At the north end, we watched a group of 40 or so starlings swirling and twisting, quite amazing, the reason? A sparrowhawk, a male judging by his size. The flock was tight at first, twisiting in formation, then it broke up, one bird hit a parked car, flying off, a bit donnered, another fell victim to the pursuer, carried off into the bushes to become a tasty meal. Now, I'm not a fussy eater by any means, but if I was a sprawk, I'm not sure a starling would be my first choice on the menu. Give me a nice, plump, collared dove any time.

Back to the patch

Yesterday afternoon found me back on the patch after a weekend away on the Lancashire coast. We fancied a weekend away, but the middle of March isn't really a good time for anywhere, so as I'd never been to the Ribble estuary we headed for Lancs.

The highlight was the RSPB reserve at Marshside, an amazing place, featuring two freshwater wet meadows and some small pools, not unlike Druridge in some ways but much bigger. It has about 100 pairs of breeding lapwings and there were already about 20 avocet there when we visited. Get this though...they maintain the wet meadows as suitable wader breeding habitat by grazing them with cows...amazing!

The day before we were there, a spotted crake had been seen (early?) and a scaup was reported, which we didn't see, which by Sunday had turned into a lesser scaup!

Anyways, back to the patch and no new migrants. I was hoping to pick up at least a chiffchaff or wheatear, maybe a puffin or sarnie tern. Offshore, there was a razorbill and a single great northern diver amongst the red throats.

A young seal pup had plonked itself onto the beach, it looked perfectly happy and healthy until the dog walkers gathered around it, this really annoyed it. It amused me when it tried biting the man who tried touching it, he deserved that. Someone had obviously called the RSPCA, as an inspector arrived and ushered the young seal back into the sea.

On the pools, a pair of pintails were the highlight, shoveler, teal and wigeon all still present. Five Canada geese on the big pool were new for the year.

A chifchaff was singing outside my office this morning, so I fully expect to hear one at Druridge on friday when I start my territory mapping surveys again.

Another coppicing session this morning, starting where we left off, just north of the Budge screen. Joined by Steve, the three of us made good progress until my chainsaw made strange noises, noises that sounded expensive...if not fatal!

So that was us, no chainsaw and not really fancying tackling some of the bigger trees with a bow saw, what else to do but go birding?

Whilst we were coppicing skylarks, wrens, robins and dunnocks were all singing. In the dunes, it was heartening to see pair of stonechats  back on territory, I feared this species might have succumb to two successive cold winters. Amazingly, the dunes now seemed full of meadow pipits.

No 'true' migrants yet, I had my hopes pinned on an osprey - may as well aim high!

The only other highlight was big female sparrowhawk hunting over the Budge fields and along the edge of the shelterbelt. It flew straight at us in the Budge Screen. Now, if I had two grands worth of dSLR kit, I would've had frame filling flight shots. As I haven't, here it is, miles away, perched in a tree.

Finally, a word of advice. If you're heading for Druridge Pools and intend going to the Oddie or little hides, do bring your wellies. This poor couple hadn't, but were obviously keen to see what was on the pool, as they scaled the bund and teetered along the edge to get there.
Nature-based tourism at its finest! Would Norfolk Wildlife Trust would get away with this Cley?

The sound of spring was in the air at Druridge today, two or three skylarks were high in the sky, blasting out their song, a lapwing was peewiting over the fields and at long last, the first returning meadow pipit since the snow was displaying in the dunes. I'm not sure it had anything to display to mind, with no sign of any other meadow pipits, but it wasn't deterred.

This time last year, the 10th of March to be precise, I had my first wheatear of the year at Druridge. It was my earliest ever Wheatear and something like the fourth earliest County record.

There were still sounds of winter to be heard at Druridge too. A flock of about 35 twite (with a handful of linnets and eight skylarks) were amongst the cattle at the north end and overhead a huge skein of pink-footed geese came up from the Warkworth Lane area, settling in the field in front of the hamlet. There was a single Eurasian white-front in with them  - bonus! My first patch white-front for over three years.

I counted the pink-feet flock and got about 2700 which isn't bad as my in-flight estimate as they flew over was 2500.

This week will hopefully bring with it some migrants, I've the day off tomorrow but will be too busy to look for migrants. We're having one last coppicing session before the breeding season. Hopefully I'll get ten minutes off for a look about.

A hunch that didn't pay off

There's been a pair of smew on Ladyburn lake at Druridge Bay Country Park for a few days now, I was there for a meeting this afternoon and a colleague had seem them at lunchtime. After the meeting I decided to have a look for them myself.....no sign.

They had probably flown over the ridge onto East Chevington, but what if, a big IF, they had gone a little bit further south....to Druridge?

Only one thing for it, I would have to check it out. My first proper post-work birding of 2011, I've missed it, just popping in to Druridge on my way home. Anyhoo, my hunch hadn't paid off, no smew at Druridge.

I did have an interesting buzzard, hovering low over NW corner of the Budge field, briefly, before it flew W behind the mounds. It was hovering quite low, with deep wing beets and showed a lot of white in the tail.

Sometimes, it is east to glance over some of our more common birds, forgetting how beautiful they are. How many times do you think "Oh, it's just a blue tit/swallow/teal etc"

I was pondering this whilst admiring a rather smart magpie, strutting around the Budge fields this afternoon. Often despised by gamekeeper and conservationist alike, there is no getting away from the fact that magpies are  stunning birds. The sun was catching this particular individual in all the right places, showing its glossy green tail and iridescent blue rump. They are cheeky characters too, which does make them hard to dislike, even if they do eat lapwing chicks. 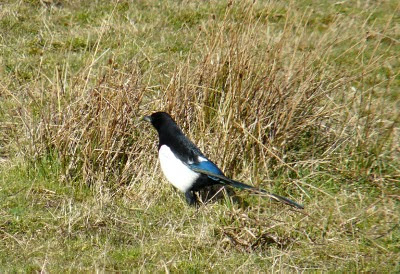 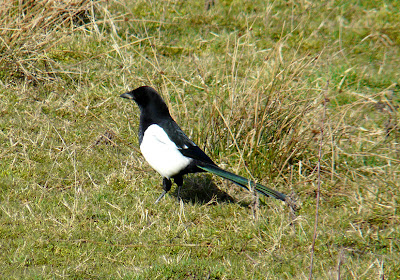 I spent the morning at Ellington Pond, putting up some tree sparrow nestboxes, so didn't get to Druridge til gone midday. Today was a lovely, sunny, spring day, which brought out lots of people to visit the coast. My short visit brought an unexpected haul of new birds for the year.

Small birds are still thin on the ground, a lone dunnock singing at High Chibburn was the first of the year on the patch and only one wren and one robin were logged. No sign of either meadow pipit or stonechat yet.

A pair of mute swans and a little grebe on the big pool made it on to the year list. There are a few smew in the County at the moment including a couple of drakes so I was hoping for one of them, sadly not. They'll no doubt turn up when I am work during the week!

A quick seawatch was productive as kittiwake and fulmar both flew by and a slavonian grebe was close in, the latter, a scarcity at Druridge, which can be missed in some years.