So, March is over.

I had a quick wander about the patch this evening, now that the clocks have changed this will be a more regular occurrence. I started with a look on the sea, actually it was more of glance, the south-easterly wind was cold enough to freeze your eyelids shut, so I beat a hasty retreat to the shelter of the dunes.

The Budge fields still hold plenty of wildfowl and smattering of lapwing, redshank and snipe. The fields look really good for when the garganeys arrive. Two stock doves pottered about the western edge.

I wandered towards the edge of the big pool and clocked a stunning male marsh harrier, hunting along the northern edge of the pool. The local crows were giving it some stick and it moved off west and then south. A second marsh harrier (female?) was towards East Chevington.

The Haul Road Flash (as I have now christened it) held seven dunlin, redshank and a couple of shelducks.

So for the Patchwork Challenge, I finish March on a pretty disappointing 88 species and 101 points. I will again be miles behind my local rivals.

Back on the patch

I was back on the patch today after my trip to Mallorca.

Before I set off, I had envisaged returning to the patch to find wheatears, sand martins, chiffchaffs and sandwich terns....maybe even a swallow or a ring ouzel.

Instead I return to sub-zero temperatures and spring well and truly on hold! Talking to Alan Tilmouth and ADMc, it sounds as if there has been no migrant action at all yet, anywhere up north.

Chatting to Andy and Alan, it was good to catch up with an old friend - Tijan Kanteh. I first met with Tijan when he guided a group of us around the Gambia in 2004 and then later a couple of Birdfairs. Tijan is a really nice, funny guy and great guide, it was good to see him again. He had been out birding with Steve and Dave, I wonder what he thought of the cold as they walked along the beach?

There were a few signs of spring. Meadow pipits in the dunes and by the flash, skylarks singing and pied wagtails (also by the flash). Also of note was a woodcock, which came out of the shelterbelt as I wandered through.

I've heard all about the 'wreck' of seabirds on the East coast, particularly involving auks, so I had a wander along the beach to see for myself the devastation. Between the north end of the patch and the big dune, I found 22 puffins, seven guilliemots, one razorbill and a kittiwake. All very sad, but I am sure it won't have too much of an impact on the population - we'll have to wait and see.


Two loony-tunes found a way to keep out the cold - dancing and doing star jumps on top of the dunes. Not a bad idea!

We went to Druridge today, the last chance of the year to do some coppicing.

I flooded the chainsaw and then it wouldn't start.

Four whooper swans flew north whilst I swore at the chainsaw. Then seven more.

We gave up and went home, 25 whooper swans flew north over the dunes at Cresswell, I guess they're heading north to the breeding grounds. I'm heading south.... to Mallorca

I'll be back on the patch at Easter

Sunday was WeBS day and it was blimmin freezin'!

A quick scout about the patch before heading to too for the match. Wildfowl numbers were down on previous months, presumably because some of the birds have started to move north again, this cold weather might have them heading back south again!

The 'redhead' smew was still on the Budge fields. Despite seeing a few displaying lapwings inland last week as well as at Druridge, there was still a decent flock of them and some curlew, so not everything has headed back to breeding grounds just yet.

The big pools was pretty-much dead.

The addition of smew during the week takes the patch total to 81 species and 91 points in the Patch Challenge.
Posted by Ipin at 22:52 No comments:

A dreich morning again at Druridge, but a redhead smew has brightened my day ...

The morning was made even better by the first displaying lapwings of the spring on the Budge fields. The fields look good now, but NWT will need to bring back some cows when the grass starts to grow, timing is critical for lowland waders. 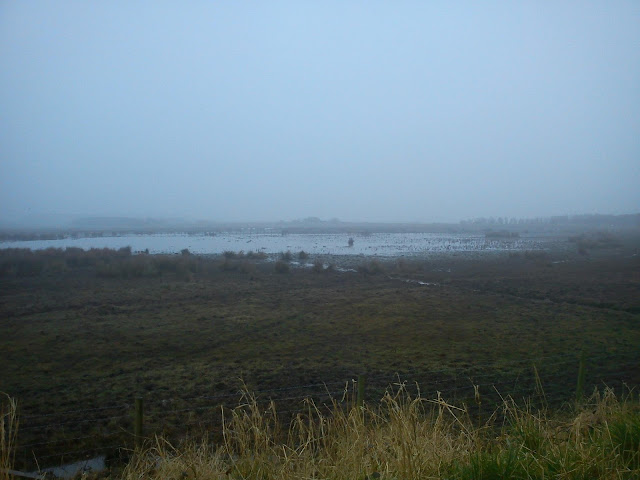