When were leaving Druridge last night, there were few yoofs turning up in knackered old cars, we had our suspicions...... 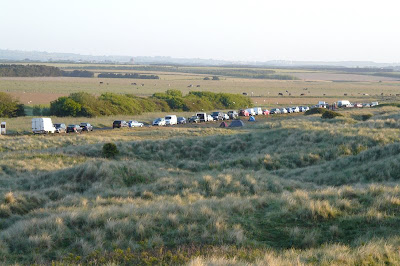 Rave on...5am this morning at Druridge
They were proved right, when we arrived at Druridge at 4.30 this morning (it was nice to be up, but there is something wrong with being out at this time in the morning), there was a rave in full swing.
There were probably about 150 or so still there at 6ish, we saw ST leaving, he reckoned he'd been to work, but we reckon he'd been raving! Like I've said before, I've no problem with raves at Druridge as long as they clear away their shit after them. When we went back to Druridge tonight, there was a huge pile of bin liners, so somebody has cleared up.
Anyhoo, due to the rave at the north end, we only put the bottom five nets up and to be honest it was quiet. Highlights were catching an entire family party of great tits, the adult (a male, which was first ringed in 2004) and his NINE offspring. 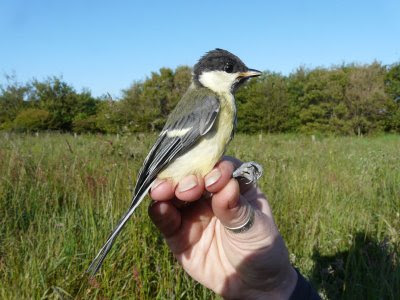 One of the nine great tit younguns
Both Janet and I managed to ring a new species today too, for me it was a woodpigeon (big buggers) and for Janet it was magpie, I've not ringed magpie either, but the trainee always plays second fiddle! 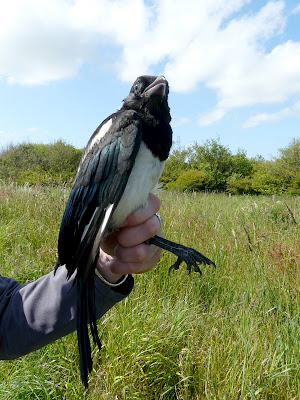 Young magpie - great fun!
Between net rounds, we checked out the sea (and the rave), on the sea we had four manxies going north (first of the year) and some naked ravers!
It was also WeBS count day, not much of note, we had missed a wood sandpiper which ADMc picked up later.
We went back to Druridge tonight, where peace and calm had once more returned. There were 68 common scoter on the sea and four red-throats and nothing much to report from the reserve.
113 manx shearwater
Posted by Ipin at 22:08

Bet Those magpies are buggers to untangle!!

This one wan't, it was running along the shelf!