Probably my last visit of 2010 to the patch and it was very, very quiet. There is a bit of a thaw on, even some green grass showing in places, but the budge fields are still frozen solid, so is the big pool apart from a postage-stamp sized bit of open water which was occupied by bathing gulls. The wigeon and teal stood around it, together, for safety.

Grey partridge are still easy to spot and two coveys of eleven and twenty were at  the north end.

The farmer at High Chibburn has agreed to put up a little owl box in his barns, so I called in there to drop him a box in. I've been seeing a little owl regularly on Druridge Lane and there has been one around the hamlet too, so hopefully they will find the box in the new year.

All going to plan there should be an annual review posted tomorrow before I sign off to celebrate the passing of another year with copious amounts of lager.
Posted by Ipin at 15:28 1 comment:

Christmas presents don't get better than this - A FULL PATCH TICK!

Christmas comes but once a year.Nowadays patch ticks don't come much more frequently.

We had our traditional Christmas Day walk at Druridge this morning,the first bird was a barn owl hunting by the road -  a year tick. The other highlights were an ermine stoat, it's aeons since I last saw a winter stoat - this one still had some brown along the ridge of its back, otherwise white, and a merlin.

As the road between Cresswell Village and Cresswell Pond is now pretty much impassable, we headed home via Widdrington and thank god we did!

Just as we rounded the double bends, I spotted a bird crouched by the roadside. Bins on it, it was a partridge, but not a grey partridge, common at Druridge, especially lately  - this one was a red-legged partridge!

Then there were two, then three, then a whole covey of at least 18 birds! Amazing! What better Christmas present could a patch worker want than a full patch tick?

I see red-legs all over Northumberland, often within two miles of Druridge, but I've never actually seen one on the patch - until today

It has to be said though, only a patch watcher could get excited about seeing red-legged partridges!

Merry Christmas to one and all!

Not much snow on the land today, but as I slid my way to Druridge today it was certainly snowing offshore from Cresswell.

Druridge was white and bright, a crisp, cold day. There wasn't many people about either, though it sure to be busy over the next few days, the road is well dicey near Cresswell Pond so that might have a few people turning back.
I walked along the road via the Budge screen and back along the beach. There were a few thrushes about and I soon had all the common winter thrushes in the bag, including this fieldfare gulping down haws.

There was a large flock of siskins moving through the bushes, feeding on the bountiful alder mast, I counted about 40 and grilled them for redpolls without any luck. There were a few goldfinches in with them though, this one was obviously bored with alder seeds and feasted on a teasel instead. 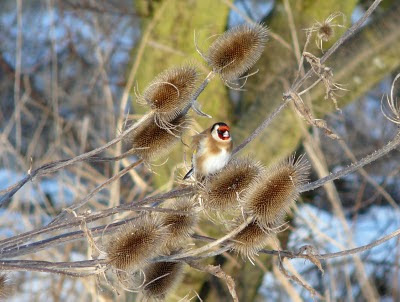 There were still lots of woodcock about, it was almost comical to see several trying to feed in amongst the sheep like the grey partridges were doing not far away, plenty of them too with coveys of 10, 11 and 25.


The beach was almost devoid of birdlife sparing a pied wag and a handful of sanderling.

It just leaves me to say "Merry Christmas" to you all and enjoy your festive birding!

I'll be at Druridge for our traditional Christmas Day walk tomorrow, I am not sure the blog will get updated though!
Posted by Ipin at 20:33 3 comments:

Firstly, Janet and I arrive in the Oddie hide this morning, having taken a day off work, get talking to a photographer chap who tells me he had a snow goose over Druridge Pools yesterday. I've seen snow goose before at Druridge but it was yonks ago and it would have been a great year-tick.- Gutted!

Secondly, after we found a little owl (my first and only owl species of the year at Druridge) being mobbed by small birds in the pine plantation, we split up, me going down the field side of the willows, Janet along the road. She gets onto a great-spotted woodpecker (a year-tick), calls me over, it flies off, I don't see it - Gutted.

Thirdly, I read the comments on yesterdays post, ST telling me had been watching two barn owls at Druridge on Friday. Two more than I've seen this year.

Just heard there's a lesser white-fronted goose in Norfolk, that would be nice!
Posted by Ipin at 21:49 5 comments:

The snow has virtually all gone from the coast now, the fields are all holding water and the Dunbar burn is running at 'full howk' over the beach.

I only had a hour or so on the patch this afternoon, trying to get out between the showers. The wet fields all had waders in them, mostly redshank and curlew and in the fields to the north there were at least 1600 pink-feets, which flew over the patch after some shots were fired, so much for shooting bans. 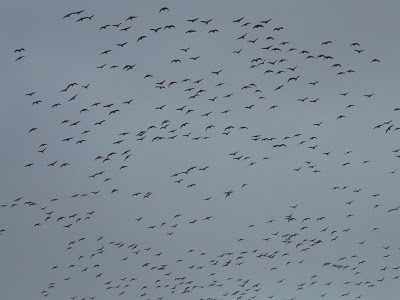 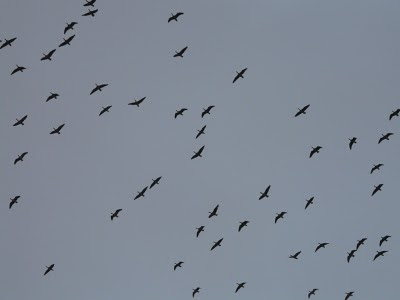 Other birds are concentrating on feeding up after the snow, not really bothered where they do it, there was family of mute swan and a dozen redshank right by the side of the road 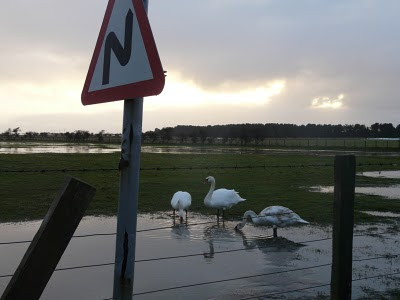 Nice to be back

I was so pleased to get out and go birding today, having fought my way to work and back every day and stuck at home all last weekend it was great to be back on the patch. What made it even better? Quality winter birding!
To kick off - lots of geese between Druridge and Hemscotthill, approaching 1000 pink-foots with nine pale-bellied brents in with them. I didn't get the scope for out for fear of scaring them, so I didn't get a chance to grill them for any other species.

I had a good walk around the patch, the most obvious and amazing thing was the number of woodcocks, they were everywhere! I din't need to walk through the bushes, there were four in the willows by the Budge screen, twelve in the pine plantation by the entrance, four in the scabby blackthorns at he north end and even one in the mugwort valley of death. There was shooting going on in the surrounding shelterbelts all day - I wonder if it was woodcock they were after?
﻿ ﻿ Whilst looking for woodcocks to photograph, I saw a stoat prancing about after something, no photo's sadly but great to watch.

The big pool had lots of wildfowl on it, nothing unusual, just common winter ducks, wigeon was the most numerous at 250.
There were lots of small birds on the move too. A flock of 50 or so skylarks were put up by a sparrowhawk, 60 twite where in the dunes to the north, two flocks of long-tailed tit and a flock of 55 goldfinch were roving about.
Nothing of note on the beach other than this gruesome dead grey seal minus its eyes and a peregrine over the dunes.

At High Chibburn Farm an incredible 29 yellowhammers were keeping their feet warm on top of the cowsheds and 20 or so skylark fed on spilled grain by the barn.
So not a bad days winter birding - 51 species without even trying.
Posted by Ipin at 21:58 3 comments: