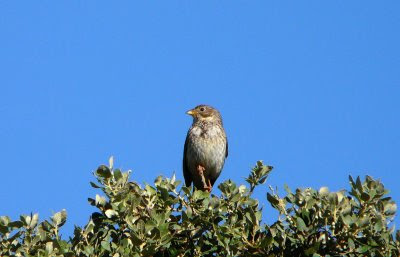 Unfortunatly not at druridge, not in in Northumberland, not even in Britain....

I've been staying at a friends place in the mountains above Malaga in Andalucia for the last week, no serious birding, though I was out every day, just chilling out really. Corn buntings were everywhere around the house, woodchat shrikes, crested larks and serin were also common with lots of other nice Andalucian specialities too. I might put some pics on Ipins Birding Trips blog if I ever get the India stuff finished!

Anyhoo, back to reality, back to Druridge....

A quick visit last night, we checked our nest boxes, the brood of blue tits have hatched before we could ring them (Janet forgot last weekend!), not much to report elsewhere, the mud in front of the little hide has all but dried up, a single lapwing chick was on it though.

Another visit tonight, but little birding was done. I had the strimmer and set about clearing the net rides, with little ringing activity and optimum growing conditions, the vegetation was waist deep!

This was the view from the Oddie hide on Sunday evening 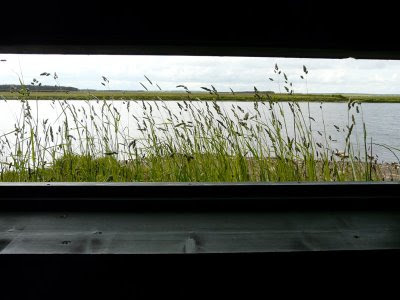 The other hides were the same, not much use to anyone.

So, being the nice chap that I am, I volunteered to strim the front of the hides whilst I was there. I was going to take 'before and after' shots, but I left my camera behind, maybe tomorrow?

Birds of note tonight, not much really, I found a grey partridge nest with 12 eggs in it and a little egret was on the big pool and there were 4 ringed plover on the beach. 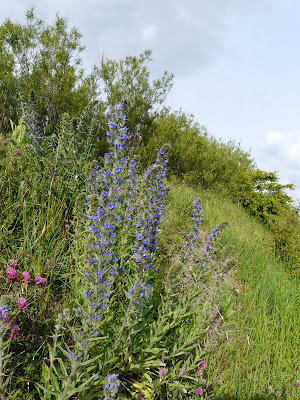 I did have my camera on Sunday and took the 'annual viper's bugloss photograph'
Posted by Ipin at 22:49

I heard you as I passed on the bike coming back from Chevington, you strim a canny tune!!!
brian