It hasn't been a great year as far as birds are concerned, posting my lowest patch total in at least the last five years, of 146 species, fourteen species down on 2011. I added two new species to the patch-list in 2012 though. A self-found and overdue Honey Buzzard in August and Mandarin Duck in July.

This is how it broke down over the year. 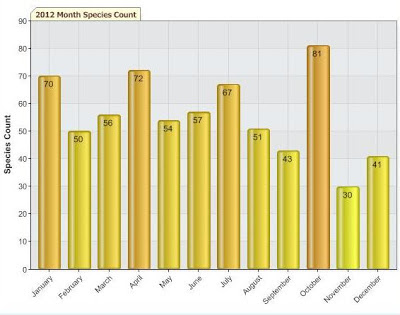 The low total can be blamed on a few things:

1) The weather. Awful
2) Grazing (or lack of) on the Budge Fields - too little, too late resulted in no passage waders
3) Effort - Work getting in the way of birding. (I had 82 separate visit to the patch in 2012)
4) I missed the 'mini' autumn fall and good seawatching days.
5) We only managed four ringing sessions

I had hoped to a nice end-of-year report, but I've run out of time. I'll do a five-year patch report sometime in the new year.

In the meantime, here are some of absentees from my 2012 list

I have a new focus for 2013. I have joined the Patchwork Challenge , along with the Stewart Sexton, Dave Elliott, Alan Tilmouth and James Common.

The patch competition that Alan ran way-back really spurred me on to work the patch a bit harder so hopefully this might too.

It just leaves me to say Happy New Year to you all and I'll see you in January with a refreshed blog and hopefully a refreshed Ipin!

A first for Druridge?

On my visit to Druridge yesterday I might have seen a first for the patch - an inland turnstone.

I'm saying inland, it was in the field west of the Budge fields, which is quite inland for a turnstone. It was feeding with some redshank, curlew and lapwings and it wasn't even high tide. Normally, the only turnstones at Druridge are fly-by birds pushed off either Snab Point or Hauxley rocks at high tide. Very, very occasionally they are on the beach.

The 'turnstone' field was quite good for waders with 91 curlew, 41 redshank and 76 lapwing, there was also a small flock of 20 odd fieldfare with a single redwing.

Two kestrels were still about the patch and a handful of lesser redpolls moved through the alders.

My patch year-list for 2012 currently stands at 146, ten off my usual year tally. I will be very lucky to get another year tick before I go on holiday on 28th December - my worst finish in years is on the cards.
Posted by Ipin at 19:50 No comments:

I received some bad news yesterday. A barn owl  we ringed  in the summer at Low Chibburn Farm , just outside my Druridge patch,has been recovered as a road casualty.

It hadn't ventured very far. We ringed it as pulli on 1st July and it was found only 2km at Widdrington as a road casualty only 51 days later.

I pick up a fair few barn owl corpses each year, mainly off the A1. They are 90% first winter/spring birds, if they survive the first year they must get a bit more street-wise. If you do see a barn owl by the side of the road  and it safe to do so, stop, and check its legs for rings. The information from any recovery is really useful.

Ringing is just part of the magnificent work of the BTO. If you use my name, you can join the BTO for only £1. Be quick as this offer ends soon. Follow this link https://www.edirectdebit.com/BTOMembership/form.aspx and put my name in the referring members box.

I've been busy with other things at weekends since then and until February I go to work in the dark and come home in the dark. To be honest I was lucky to make it out today, felled by a dose of manflu over the weekend but I just had to get out.

Predictably at this time of the year, Druridge threw up no suprises... no great grey shrikes, no hume's warblers, nowt of note at all really.

Even offshore there was nowt, one red-throated diver and a pochard flew north with a gang of mallard.

This pheasant was a highlight....


This first winter or female kestrel was knocking about. You can just make out a ring on it's leg, even zooming up the RAW file I couldn't make the number out.


At Cresswell over 4500 pink-footed geese in the winter cereal field behind the Drift Inn Cafe (now deceased) were a sight to behold.


Next weekend has promise if I survive the manflu. No work, no football so hangovers aside I might get some birding or ringing in.
Posted by Ipin at 20:31 2 comments: