Having twitched cattle egret at the weekend, a look through old blog posts from January 2008 made stumbling on this quite bizarre 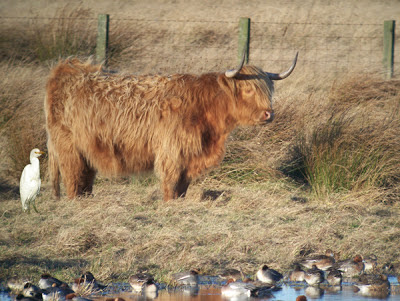 Maybe, just maybe my dream of 2008 might come true and the cattle egret may no longer find Holy Island to its liking and head south.....

A twitch took priority over my patch this morning, as I headed north, with what seemed like most of the other birders in the County to Holy Island, to see Northumberland's second ever (and first twitchable) cattle egret.

The bird had roosted in the garden of the bungalow on the Crooked Lonnen overnight and was still in the garden, barely visible, when we arrived. It vacated the garden and flew around for a while, before landing in the adjacent field giving the assembled twitchers good views.

As regular readers of the blog will know, I am a reluctant twitcher and rarely travel beyond the County line and I have to admit today's experience isn't high on my list of memorable birding experiences. It was good to catch up with a few folk I've not seen for a while. The addition of cattle egret took my Northumberland list to 306, it was also a British tick for me, but I haven't a clue what that list stands at.

After a quick brew and bacon buttie at home, I was down on the patch. First job was my overdue WeBS count, which took a while as there was lot of birds on the Budge fields, not helped by them being flight for some reason.

Teal numbered 139, wigeon 127, shoveler 9, greylag 112, dunlin 22 and gadwall 10. On the big pool, the long-tailed duck reported yesterday was still present - a good patch bird indeed! This is my first patch 'oldsquaw' since 2007.

It may be because I have been in Thailand for three weeks, but the strong SW wind made it freezing cold, I retreated to the shelter of the dunes for a quick look at the sea. There wasn't much on it, one red-throated diver and some gulls, I picked up a great northern diver flying north, close in, and a flock of about 60 curlew with a single bar-tailed godwit amongst them.

So today's efforts saw my patch list reach 48 species (52 points in the patch competition). This could well be my last visit of January unless I can sneak in a quick dawn-raid before work.

It's nearly the end of January, but for me, a new year started on the patch today. I've been to Thailand on birding holiday since December 28th. I will put some photo's on the other blog soon but here is something to whet the appetite.


With the new year, I thought the blog needed a new look. I've gone for a warm feel to dispel thoughts of winter as I write it.

It certainly wasn't warm for my first patch visit of 2013, it was bloody freezing!. I had less than an hour before having to go to work so I concentrated on the hamlet and the north end. I managed to add 23 species  to the list in 45 minutes. The highlight was undoubtedly the number of fieldfare, with small flocks in most of the paddocks, there must have been over 200 on the patch, obviously part of cold-weather movement. There were also small parties of skylark moving through and meadow pipits were also noted.

A couple of hundred pink-feet moved south and there were over 1000 north of the haul road, I didn't have time to grill them though, maybe tomorrow. Dave Elliott had long-tailed ducks and seven pintail on the pool  - another target for tomorrow.

Tomorrows first target is somewhat further away however. I'm off twitching. A cattle egret has apparently been on Holy Island for the last couple of days, only the second county record and  the first twitchable one. A nice edition to both my county and British lists if I catch up with it.

My new challenge is the patchwork competition. I've got some catching up to do though, my 'local rivals' have already topped a hundred species for the year.