I've been up the coast for work today, had three swallows flying north at Spittal and a single at Bamburgh - so that's it, Summer is here! Also 3 sandwich terns at Bamburgh.
Anyhoo, I called at Druridge briefly on my way home, thinking "maybe a garganey has dropped in", I get to the Budge screen and what's the first bird I see - drake garganey, closely followed by a female. Just the ticket, and feeling all smug cos I thought I might of been the first to see them, but it appears not, Adrian Allen arrived and told me they had been on 'Birdguides'. 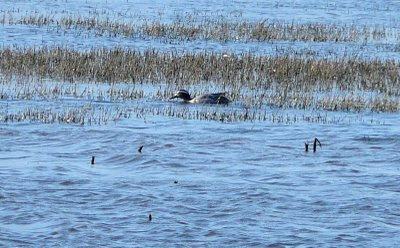 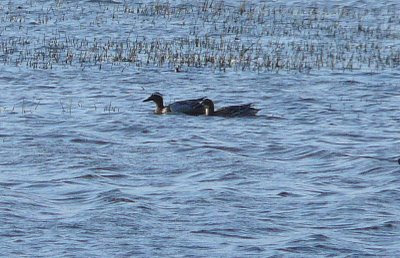 Him'n'Her
The godwit was still there, but no sign of the egret - though it had been seen earlier by Trevor and Brian Bulloughs - who also had an LRP at Dru...BUGGER...I missed LRP last year at Dru, hope that's not the first and last one!
72 Garganey
Posted by Ipin at 23:10

Gargany! oooh! How I wish one would plop itself down on my patch lakes. ( more than unlikely!!)