We were doing some net-ride clearance at Druridge this afternoon, the chainsaw helping to clear my monstrous hangover, when we spotted a chap legging it towards the Budge screen, we thought 'that's odd!' - there must be something about. So I got permission offuv the Project Manager (Fairclough) to investigate. The chap said there had been a little egret reported on Birdguides and he was running cos he'd left his dog in his car. Anyhoo, it wasn't there when I gave the Budge fields a brief scan and the running chap was off, without seeing the egret, to return to his dog. No sooner had he disappeared then it came out in front of the little hide - year tick No. 1.

After we finished the net-rides, we had time for some proper birding, there was still no migrant passerines to be had, still no sand martins or chiffchaffs.. the Budge fields are looking good for breeding stuff though, so hopefully the lapwings and snipe will have a good year and it should attract some passage waders too.

A quick look on the sea produced a flurry of year ticks, well, four..I got my first guillie's, gannet, kittiwake and fulmar of 2009, also of note was 5 red-throats.

On the way back to the car, I called in to see if the egret was photographable from the Budge screen, it was there but distant, but a further quick scan added black-tailed godwit to the year list with one feeding on the Budge fields. 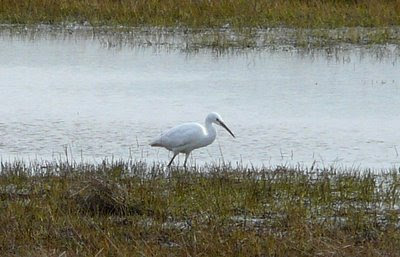 Interestingly, this time last year I was 83 for the year and had just added firecrest to the year list...

Aye Warren, I've been away too much, missed all of january and half of march, there's plenty of time to catch up though!