It was nice at Druridge tonight, a hazy end to a sunny day, I popped down after work for a bit. 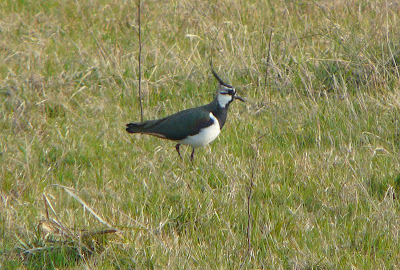 Lapwing on the Budge fields
Ian Fisher had texted me about ruff and dunlins on the Budge fields earlier in the day as well as three snow geese he had flying north, I always regard snow geese as being a bit dubious so I am not too concerned about missing these.
The single reeve and six sumplum dunlins were still there though and were both year ticks. Another year tick was heard singing from the Oddie hide then seen perched up by the edge of the pool, my first sedge warbler of the year. 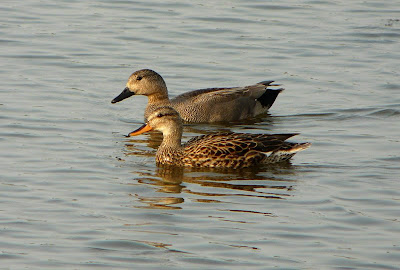 A pair of gadwall on the big pool
On the way to look on the sea, we bumped into a chap from Cramlington who told us he had seen a short-eared owl perched on a fencepost on his way to the preceptory, will be keeping an eye open for that one!
Also on the way to the sea, we came across this wheatear perched in a bush, which was joined by a stonechat, showing well in the warm evening sunlight. 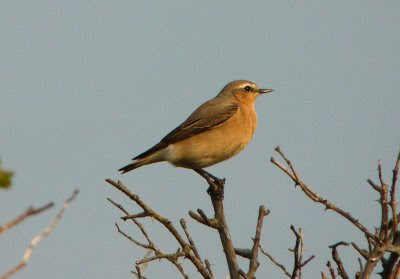 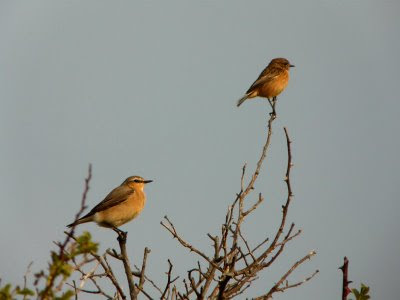 On the sea, a common tern flying north was my first of the year and 15 red-throated divers was a good count.
All going to plan we should be ringing tomorrow....watch this space!
86 Ruff
87 Dunlin
88 Sedge Warbler
89 Common Tern
Posted by Ipin at 20:38