Back from Dublin after seeing the mighty AC/DC, I'm in one piece but my wallet's not - jeees it's expensive over there, €6 for a bottle of lager in the venue and €6 a pint elsewhere!
AC/DC were worth every penny though
It was a nice bright night at Duridge tonight, a cold south-easterly reminding me it was still April though. Chatting to IF at the entrance, we saw at least four wheatears on the short grass, with another further along. Last weeks little egret was still on the Budge Fields, it's never easy to see, preferring to skulk in the rushes at the back, my first whimbrel of the year called as it flew south, two more were calling later. IF had seen a mallard accompanied by a gaggle of very small ducklings, but I didn't see them. 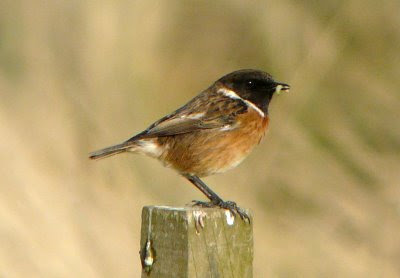 Stonechat on the fence enjoying a caterpillar
Offshore, more year-ticks were to be had, several puffins flew back and forth, 13 common scoter flew north (it's incredible that these are the first common scoter I have seen on the patch this year) and a pair of red-breasted mergansers were floating about on the sea. Sandwich tern numbers have really picked up this week and there are still at least 11 red-throated divers offshore. 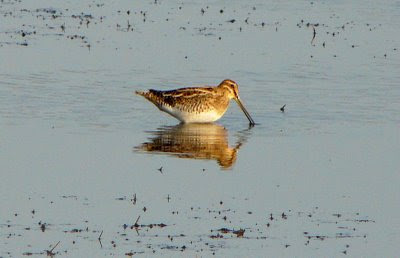 snipe on the Budge fields

some great species you get on your patch Ipin. Hope I get a Whimbrel flyover this year!