Pardon the pun, I was slipping into 'local rag' mode there! it was a beautiful sunny morning at Druridge this morning, a breezy SE wind kept it cool though.
If somebody had plonked me down at Druridge today, from a spacecraft, not knowing what date it was, I could've named it as Easter bank holiday. Druridge somehow attracts all manner of plebs on bank holidays weekends and today was no different.
Fires were still burning from trees hacked down during the night, mini-motorbikes with charvas on board sped along the length of the reserve and muppets in corsas played rave music at full howk. I had 'wurds' with some geezer who allowed his dogs to shit on the grass by the road, remote controlled cars were on the beach and microlights were overhead. Hurrah!
Now, as regular readers of this blog know, I'm keen on people enjoying the countryside in all manner of ways, as long they respect it, but your average bank holiday visitors have no respect at all - Rant over.
On the positive side, the garganeys and the little egret were still on the Budge fields and a great-crested grebe on the main pool was a bonus as was sandwich tern offshore. 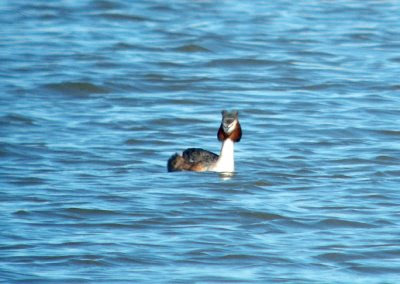 On the non-bird front, I recorded my first two butterflies of the year, a small tortoiseshell and this scabby-looking peacock, highlight of the day however was four bottlenosed dolphins in the bay, two of which were really close in, about offuv east chev when first picked up, just beyond the breakers. Both 'twos' were moving north - NICE! 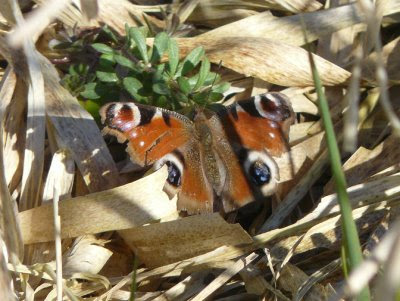 Also on the migrant front, swallow was seen again heading south, there were two wheatears on the haul road, willow warblers seemed to be singing everywhere and sand martins were now common.
News from ADMc and TB - Two avocets flew from E. Chev and landed briefly at Cresswell Pond before flying off south...and they didn't have the decency to pop in to Druridge!
78 great-crested grebe
79 sandwich tern
Posted by Ipin at 23:06

I don't know what I like best - your rants - or you wildlife reports! keep them both up.