Not much to report from Druridge today, the bushes were devoid of migrants other than robins. The ibis had cleared off earlier in the morning, spooked by photographers on the baffle banks and flew off north seemingly, I hope it's gone to Hauxley and never comes back and all of the annoying photographers cluttering up the hide will go with it!

Was that a rant?
No news on it either way on RBA tonight. People will still continue to turn up though as there was more NWT spin in yesterday's Journal, strangely NWT didn't mention that the Radde's warbler was actually caught and ringed on the NATIONAL TRUST site....odd eh? 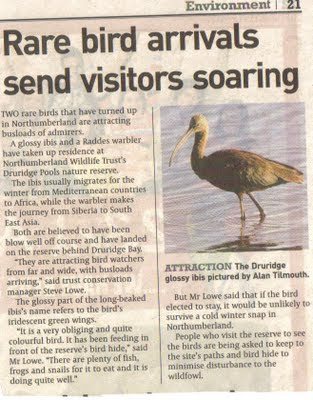 Still a greenshank hanging about and offshore there were at least 18 red-throated divers.
I bumped into Alan Gilbertson today and he gave me an aerial photo of Druridge in 1972 when the site was still being opencast mined for coal. You can make out the dunes and the existing road and the preceptory which was left intact during the mining operation. You can also see 'Big Geordie' the dragline machine There wasn't enough material left to fill the hole, hence the incredibly deep Druridge Pool. Very interesting, thanks Alan! 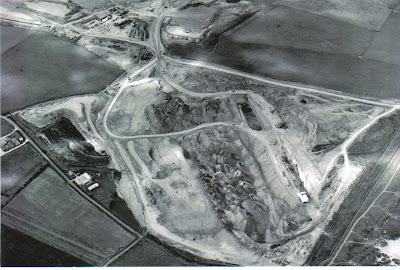 Did they know? I wouldn't ahve known had you not pointed it out here.

Hurrah for birds being 'blown off course'!

I've been a birdwatcher since the 60's and used to take up all the room in birdhides with tripod and scope now i'm usually in birdhides with a camera but i take up less room with just my camera and a beanbag. Before digital i hardly saw anyone, nowadays i agree there are lots more people taking photos but i don't think this is a bad thing, the more people interested in birdlife can only be for the good.