Janet is away in Canada for a few weeks, in her absence she was keen to have Druridge 'covered', so tom Cadwallender agreed to supervise any ringing operations in her absence. I texted her last night to tell her that Tom, Neil Anderson and I would be ringing there on Saturday morning, her response was "Have fun but don't catch anything rare though!"....

We only went and caught a Radde's Warbler! 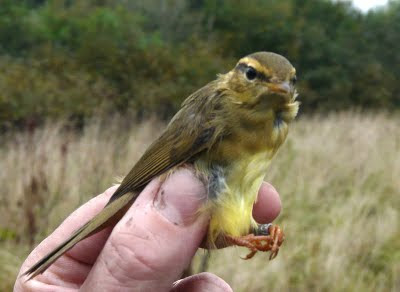 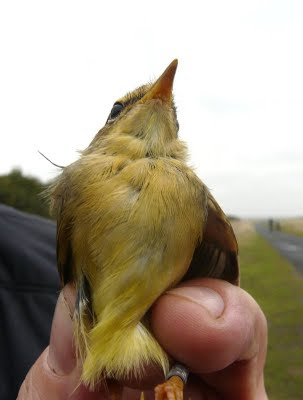 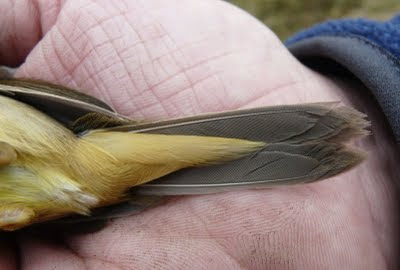 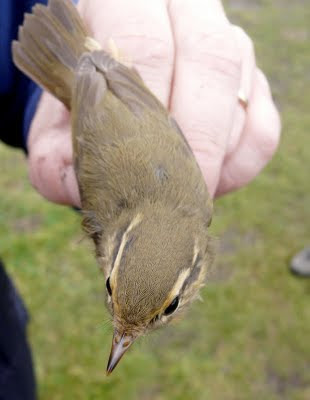 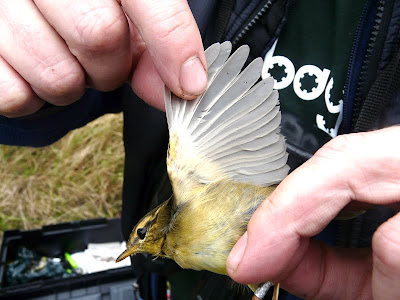 This is my first ever Raddes's warbler in Britain, my second patch tick in a week and a new bird for the patch (I think).

We put the news straight out to enable people to see it before we released it and it caused quite a twitch! 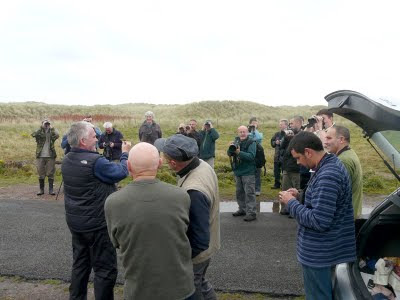 These are really stunning birds, I saw loads of them in China last year but it was a real thrill to catch one here. I didn't get to ring it though, trainee's are last in line for such birds! I am not too fussed though, it was a good ringing tick for Neil!

Radde's is no longer a BBRC description species, so it will just go to the County Records Committee so we'd better not put my name on the description or it will get canned for sure!

It was seen again later by Jeremy Crate and Stef McElwee near the channel on the path to the Oddie Hide.

Other than the Radde's ringing was quite tame, we caught 17 new birds and 5 retraps, other highlights were a female redstart, a chiffchaff and this nice grey-looking robin, surely a continental bird? 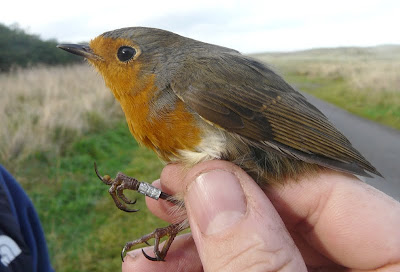 After the excitement of ringing I has mosey around the patch, I still couldn't manage a decent photo of the ibis, though the hide was full so I didn't hang around. Instead I went up to the Preceptory and then the farm and back by the hamlet and saw very little, though a covey of 14 grey partridge feeding in the barn at the farm was nice and two grey wags flew over which are scarce at Druridge.

All morning we had skylarks moving overhead, impossible to say how many.

Next was a look offshore, nothing was really moving as such, but there was loads of birds loafing on the sea, the light had gone a bit and the sea was very choppy so viewing was difficult but there were at least 58 (yes 58!!) red-throated divers, 55 common scoter with a single drake scaup in with them, 110 teal and harbour porpoise.

Now, regular visitors to Druridge and readers of this blog will know that strange and obscure behaviour is a regular occurence down here, well, today was no exception. As I was looking on the sea, getting towards dusk, my attention was drawn to a huge 52 seater coach, reversing - I kid you not, along the narrow Druridge track, all the way to the entrance to the hides!

WTF? What is going on here I'm thinking to myself... 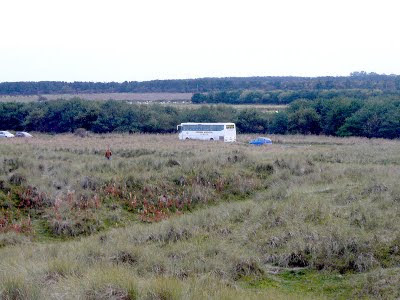 So it pulls to a stop and then, the really strange thing, about 20 or so scone munchers clamber off with bins and scopes....obviously twitching the Radde's or maybe the ibis...or maybe both 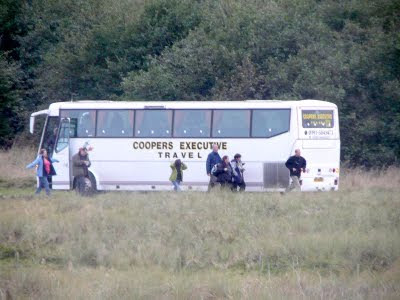 You can clearly see the lead chappie here sprinting away which suggests they might have been after the Radde's as the ibis has stayed rooted for nearly two weeks, I wonder if they saw it?

What really made me laugh was that they all sat aboard the huge coach as it gingerly reversed along the single track road, if they had got out and walked from the entrance they might have seen some birds!

Well done with the raddes, a top bird that !

you have another coachfull coming tomorrow with a joint DBC/TBC trip in tha area.

Alan, this ibis might well meet the same fate as the 1908 Alnmouth birds, so I can get my patch back to myself!

I remember hearing an article once on Radio 4 about migratory birds and in a lot of cases we were on seeing these birds 'celebrating failure'
(on there part) as most will not survive to return to where they should be. Is this true with the raddes and where should it be??

Matzappa, I think is generally true, I think some passerines can relocate themsevels, maybe if our ringed Radde's is ever retrapped we will find out, but I think things are worse for the ibis, it looks like it is here for the winter, wich will no doubt kill it.