Despite my reservations last night, I gave in and went, I still hate twitching, but this one was worth it and I had to really, a first for Britain only 30 miles from home. Shame it hadn't been a few miles further north, to save crossing the Tyne into mackem land! Thanks to Alan Gilbertson for the lift down there! 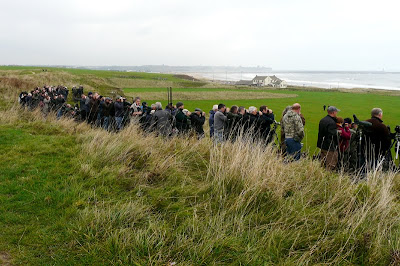 The bird showed really well, if briefly, but the short glimpses I got were excellent. The twitch was quite well behaved, one chap got particularly angry with people encroaching and started shouting and other than a really annoying woman in a bright red coat no-less, who's pager on loud mode went off every 30 seconds, I didn't feel the need to abuse anyone! One chap did make me laugh, on arriving he proclaimed "I left the house so quickly, I didn't have time to look to see what this bird looks like" he then thumbed the index of his Spotters guide to common British Birds or similar and then quietly put it back in his rucsac....

Back to the sanctuary of Druridge....

Despite going to mackem land and back, I still managed nearly six hours on the patch...and I was rewarded. Pre-twitch from 0750-0940 I didn't see a lot, highlight was unidentified owl. I was alerted to it by a bunch of robins, wrens and tits giving something hell in a lone pine in the plantation, as I approached, it flew out never to be seen again. All I could make out was that it was small (Smaller than SEO or LEO) and brown and appeared to be streaked...I think it was probably a little owl.

Post twitch I went back to the plantation to look for the owl and found a firecrest, in the dense stuff at first then favouring the sycamore and pines by the road. It was a stunningly bright male, sadly no pics as it didn't stay sill long enough. I always work this plantation first during the Autumn, it is normally representatvie of what is about. There were two chiffs, including a grey looking eastern bird, 3 goldcrests, 2 blackcaps and at lest 20 robins in here.

I continued to work through the bushes, right to the north end, seeing more chiffs and goldcrests, a great-spotted woodpecker and lots of robins, but no woodcocks?. At the top end by the whitebeams, there were a few thrushes including three nice redwings and a tit flock, as it moved through I picked up a goldcrest, a chiff and then a yellow-browed warbler in amongst them...nice! I would have loved to turn it into a Pallas's but sadly couldn't so that will remain an obvious gap in my Druridge list for a little longer.

The weather looks crap for birding for the next few days so it'll be lager, football and DIY!

Now be honest Ian are your glad or sad that it did not turn up as a bundle of fluff in one of your nets !!!
Brian

I reckon you and the newton stringer should right a book about the antics that some twitchers get up too. Makes me laugh!

I fuggin hate twitchers me.....

They can take those stupid bleepy pagers and shove them right up their own arses as far as I am concerned !!.... Then again many may not be able to because they'll be talking at the time.....