Black redstarts...that's what! They're everywhere but Druridge (they've been there, I was in Birmingham).
There's half a dozen at Alnmouth, three's at Howick and Newton, several on the Farne Islands. So this morning I bashed the patch, especially the places that are good for black redstarts, like the hamlet, High Chibburn farm, the North end...not a one!
It was a lovely sunny morning but still bloody cold, eith the remains of ice on the pools and a bighting SW wind.
Of note at Druridge today was 25 Whoopers flying north (is that them away?), 45 Oyc's on the flooded fields by the haul road, a couple of wheatears and amazingly a goldcrest! 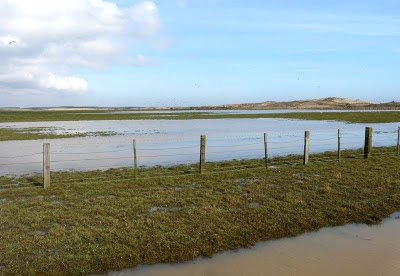 The new Druridge wetlands - if only they were a more permanent feature! 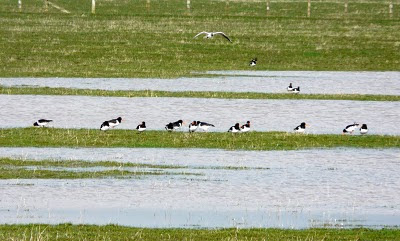 A word of warning, as well as the plebs who congregate at Druridge, there is a new danger for the unsuspecting birder - dangerous sheep! 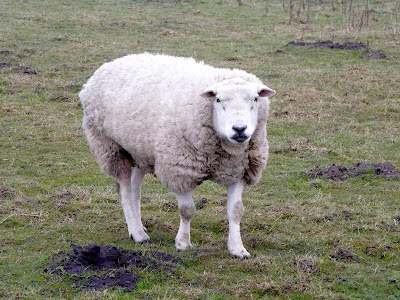 When I was doing my Common Bird Census on Monday, I ventured into the paddock by the entrance and was attacked by three aggressive tupps! At first I thought they were just trying to mug for me food, but this one (the ringleader), headbutted me in the leg and then tried to bite me! Scaring them didn't work, so I moved away, only to be chased by all three, in the end I had to leg it out of the paddock with them all in hot pursuit! Evil, I tell ya....
**Latest update on the black redstart front - Low Newton 8-Druridge Pools 0
94 collared dove
95 goldcrest
Posted by Ipin at 23:35

Someone told me there was an osprey at Druridge yesterday ?

Anyway, sounds like the big white heron is coming your way, and that certainly trumps black redstarts...