back on the patch

I'm back, and still recovering, from a trip to the Aiguamolls Natural Parc in Empordia near Girona in NE Spain, it was a work trip and was incredibly hard work, but very enjoyable.

Aiguamolls is a bit like a massive Druridge, imagine if East Chev, Druridge Pools and Cresswell Pond and all of the surrounding farmland were managed as one huge wetland - that is a bit like Aiguamolls. The reserve is both fresh and brackish water and is grazed year-round on rotation using camargue horses, they also use pumps to manage the water levels between ponds and fields.....If only Druridge could be like that.....SNAP OUT OF IT IPIN IT'S JUST A DREAM!!! 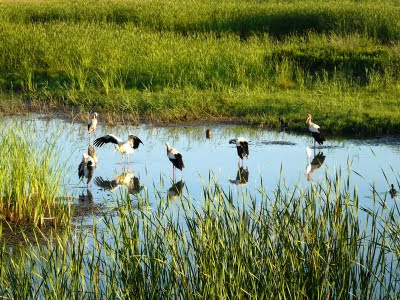 I have had two visits to the patch since I got back, both brief. On monday evening there appeared to be a lot of passerines on the move through the bushes, willow warblers, chaffinches, sedge warblers etc.

Also, in the small patch of reed in the SE corner of the big pools, several sedge warblers and a reed warbler moved along the edge, reed warbler is a year tick.

Tonight, a quick look offshore and through the gull roost on the beach. There are about 180 common scoter in the bay with a single drake velvet scoter amongem. There was a huge gull roost on the beach by Chibburn Mouth and a smaller one at Druridge, common gulls making up the majority (about 60%) with BHG's the majority of the remainder with a handful of great and lesser black backs and herring gulls.

There were a few arctic and sandwich terns, 12 dunlin, 5 sanderling, 1 curlew but star bird went to a stunning summer plumaged grey plover.