I had a patch tick today, not a bird but a butterfly - a speckled wood! 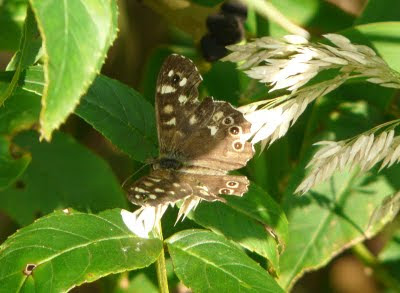 This is also the first speckled wood I have seen in the County, talking to the Boulmer Birder the other day, he was telling me he sees them at Howick. The book reckons the population is expanding, well, it's expanded all the way to Druridge Bay! I've only seen this on visits further south to places like Arnside and Silverdale.
I had two visits to Druridge today, this morning was a stunning morning, sunny, no wind, a great morning to be out. I birded along the road looking for migrants, there were lots of common migrants in the bushes, chifchaffs, willow warblers, blackcaps, common whitethroats etc, I was hoping of a redstart or whinchat, no luck there though. 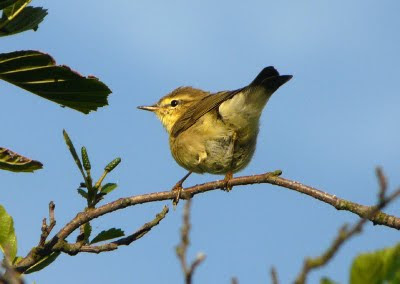 willow warbler in the bushes
As well as the speckled wood MEGA there were also lots of walls, I caught this pair 'urn the jurb' 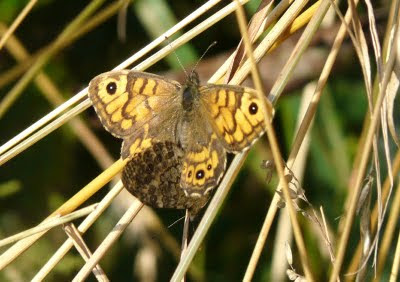 wall butterflies - humping
Good news(ish) on the NWT front, five more cows have arrived on the Budge fields, well two of them are really only half-sized cows so we'll call them one, bring the grand total to 10! We could do with 35, not 5, to get the job done quickly enough if we are to see any passage waders at all this autumn! Maybe NWT don't understand the needs of birders......... 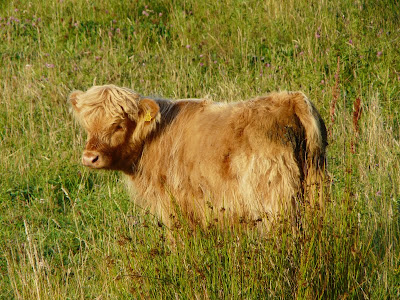 New kid on the patch - get munching you lazy bugger
My second visit was after work, this evening. The wind had come around out of the SE and it felt a lot cooler, I did an hour and bit seawatching and saw
manx shearwater 87
arctic skua 4
teal 8N
common scoter 140
dunlin 2 on beach
roseate tern 2
and the usual collection of terns, gulls cormorants and stuff...
Posted by Ipin at 21:45

Pleased I didn't mislead, I got the CS at Cresswell.

Any chance those cows can get down to Cresswell with spades and clear that sandbar while they're on?

Well done on your Speckled wood Ipin. They are common here, but a Wall, would be a patch tick and a Mega for me.

Keep up the visits, migrants are comming!