All good intentions of doing atlas work this morning, were knocked on the head when the Toon got beat yesterday and sorrows needed drowning. My leisurely start to the morning, after staying in bed til gone 1030, cam to an abrupt end when I checked the mobile to see a message from Dave Elliott saying 'Spoonbill at Druridge'. Thankfully it was still there when I turned up 5 hours after he had found it.
It didn't do a lot, spoonbills rarely do, it just slept a lot. It wasn't even close enough for a photo as it was right over by the heronry wood. After getting our fill of the spooner, we had a roam around the patch.
There wasn't much to report though, none of the goodies that Newbiggin has turned up. There's a few young birds about, one of the lapwing pairs had two small young today and there appears to be another young gadwall. There were 4 pheasant chicks cheeping in the wood, after the mother was scared off by me trampling about.
We spotted a meadow pipit feeding young in the dunes, and found the nest with 5 large ringable young, so they got ringed and put back. I wish I had more time to look for nests, but never have. 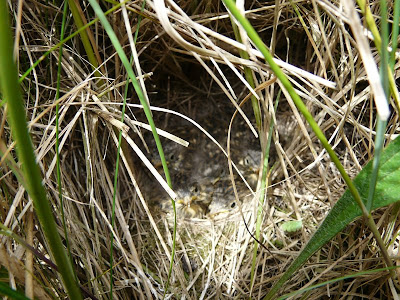 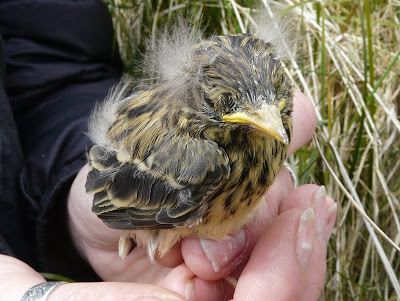 Above top the mipit nestlings in the nest and above, one of the nestlings after it had been ringed
On the non-bird front, I saw my first wall brown butterfly of the year 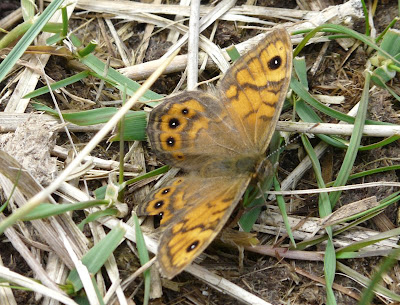 We also came across this plant, I can't find it in my book, I think it might be a saxifrage, but have posted it below so hopefully Nigel or Stewart can help me out. 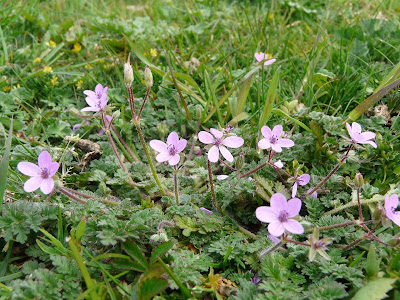 Roppa I think its one of the Cranesbills there are no saxifrage in the dunes...

It is a cranesbill type...I think it is herb robert (Geranium robertianum).

It is Common storksbill Ian. I have posted a pic from a couple of weeks ago on my blog from Hadston links. They are shorter and 'stumpier' in the dunes compared to the ones you will find inland. The 'storks' bill doesn't appear until the plant stops flowering.

Thanks for sorting that one out boys!