I've had a couple of visits to Druridge since my last post, clinging on to the hope that a rare wader might have dropped onto the budge fields.
Yesterday morning, before work, there were two greenshanks on the Budge with a few dunlin and ringed plovers. Another pair of common whitethroat were also found, so there are three confirmed territories at Druridge.
Tonight, it was all very quiet, one dunlin on the Budge fields and little else of note. I headed for a quick look on the sea and spotted the stonechat family in the bushes and I am happy to say that all three younguns we ringed out of the nest have fledged and are sporting their shiny new rings. 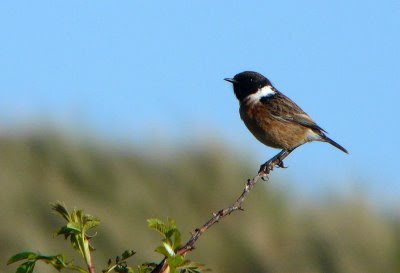 Above top, ringed juvvvy stonechat and above the 'fatha'
I was joined on the Dunes by Trev Blake, we had both noticed a chap carrying a huge rucsac - but weren't prepared for him rising up above the dunes and flying over our heads - unpowered! 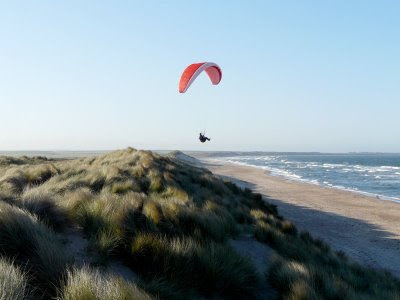 the flying man takes off 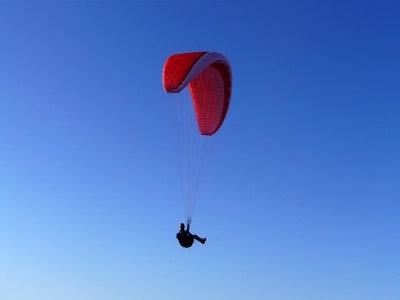 And then flies over me n Trev's heads! 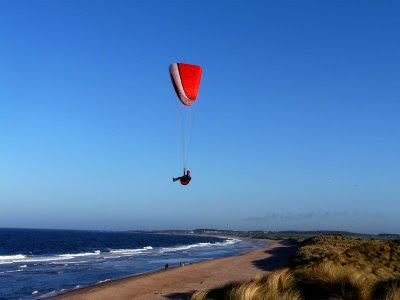 and there he is off over the dunes, we watched him for a bit, then got bored, the next we noticed he was lugging the whole kit and kaboodle along the beach, must have had a crash landing!
I've added this to my 'Bizzare Behaviour at Druridge' list!
Trev and me had an adult little gull flying south, which was all of note.
105 little gull
Posted by Ipin at 21:21