undipped - firecrest.... and what a little stunner!

Called at a very windy Dru on my way home from work this evening with little hope of seeing the firecrest, but as I arrived at the Budge Screen, a couple of local birders were watching it in the willows....and what a little stunner, really bright in a nice light, despite the wind. Since my camera is busted I couldn't get any pics but here are a couple of Alan Gilbertsons (thanks Alan!!!) Alan wasn't happy with the middle shot, but it shows the crown off fantastically. 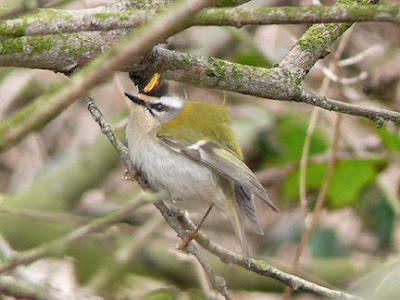 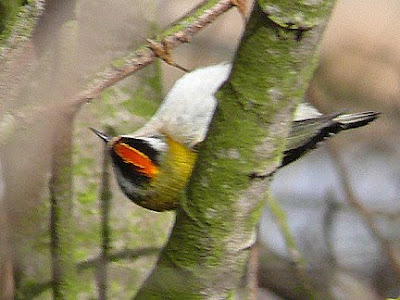 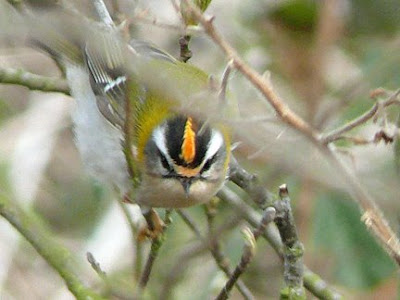 I watched it for twenty minutes as it a mini-circle around the bushes with 2-3 goldcrests. The funny thing was though, as I left, it was by the screen, I walked, without stopping to the gateway, when I got there, it was by the side of the path...odd. Either it flew straight though the wood after me, which it had never done whilst I was watching it....or there are two of them!! which I guess is possible given there were nine at Spurn today!
Lots of gulls on the meadows, mainly black-headed but nothing unusual. Also ten sand martins (year tick), six grey herons and an assortment of ducks and waders, again, nothing out of the ordinary.
Looks like the wind will drop in the next day or two before a howling northerly comes in over the weekend, that will send a few migrants back south again!
firecrest 82
sand martin 83
Check out Brian's blog for more firecrest shots and great short-eared owl from Dru..http://northumbrianbirding.blogspot.com/
Posted by Ipin at 22:16

Look at the gash on that...

there was a discussion on radio 1 this morning about 'bad' words, gash was number 2 I think, with 'discharge' being the worst....

I've seen discharge in concert !!.... back in the day when I was into all that hardcore punk....

Gary, did you ever see dogpiss?

Fed Ordinary - the name even signposts how shit its going to taste.

Their Fed Decidely Average is even worse.......