It was a bit more like summer today, though the light northerly wind still had a bite in it. Had two brief visits to the patch today, either side of a work appointment in Alnmouth. This morning, the highlight was willow warbler, one singing by the entrance to the Oddie hide - first of the year for me. Other migrants included a female wheatear by the Dru bushes and sand martins. On the main pool, two otters were on the far side, the big dog and another.
Offshore there was a summer plumage red-throated diver and a handful of razorbill, on the horizon a string of at least 80 gannets headed north - still no fulmar!
On the way home we had the hooded crow in the NT paddock, south of the plantation.
Nothing much added this afternoon, there were at least 3 willow warblers and two chiffies in the bushes and the wheatear (or another) was by the top blockhouse. A dunlin was on the Budge fields. 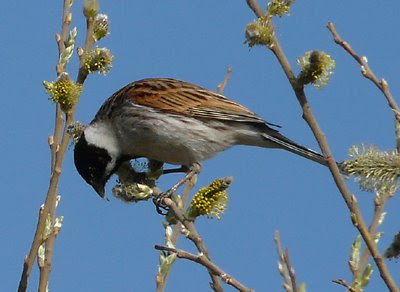 Oh and the indicator of summer - the first ned visitor - this chap had some kind of petrol go-cart, fashioned from an old ride-on mower or similar..the sun always fetches out the neds.