Red-breasted goose - ON THE PATCH!!!!

Red-breasted goose - on (or should I say over) the patch..... is it tickable, well it's on my list until I am told to take it off - Here's the story.....
Got a call offuv AG whilst in the office to say there were two avocets on the Budge fields, couldn't get away and also had to call at Morrisons to buy food, so by 1720 am driving north to Dru, Boulmer Birder phones to say they have been flushed by a kite (not a red one neither, some wazzack on the beach with a giant purple one), just before this there is a message from the pager people to say that there is a red-breasted goose at Chev, BB confirms that it is there, plans diverted.
So off I go to Chev, a few folk are gathered by the back of the hide that nobody uses, watching the goose behind a hawthorn hedge (with greylags and pinkies). Every so often you we would get 'crippling views' as the r-b goose would pass a narrow gap in the hedge, or would gain a bit of height so you could see the top of its head (to calls of "it's showing well there now"), but there was no mistaking it's identity. 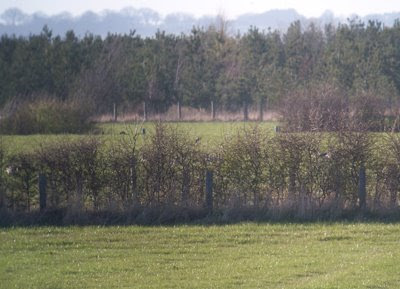 "It's showing well there now"
Enough of this, I'm off to Dru to see if the Avocets had returned ....and indeed they had. 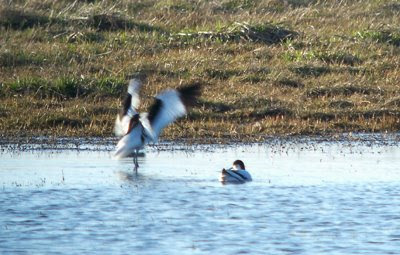 So me 'n' MJC and some others are watchin the avocets, when I spot a small skeen of geese coming over - with a small one amongst them, bins up - red-breasted goose on the patch! Get In! We watched as they eventually wiffled down to the fields behind Bell's ponds.
R-b goose is a new bird for me, so to get it on the patch is fantastic. As with any wildfowl, especially something that knocks about with a gang of greylags, it is automatically assumed to be out of a cage, especially by those who haven't seen it (You know who you are - JF!). The avocets could also be out of a cage - who knows? Anyhoo, it's on my list until it is proved that it is not wild, it looked wild to me as it flew over, it had that look in its eye!
So that's the patch list onto 212.
It's on the pager tonight that (presumably) the Hauxley drake GW teal was at Dru tonight, guess where I am going before work......
93 Avocet
94 Red-breasted goose
Posted by Ipin at 22:35

Anyway I've not got time to be writing this, just heard there is a baikal teal in flintshire so I'm off..... must remember to pick up a loaf of bread on the way...

Thanks for the support chaps....