I stopped at Druridge for literally five minutes tonight, in the rain and cold northerly wind - it felt more like late October than early June.

After I had 'bollocked' a couple in a landrover who had driven over the mounds that are either side of the road at Druridge, that are there obviously to keep vehicles out ....Why is that people who buy 4X4's feel some strange urge to do silly things?
If there is grassy knoll in an otherwise perfectly flat car park,  you can bet the 4X4 owning wazzack will park on it!
The marsh warbler was still singing from the willows over the mound.
The area if frequents was once pristine habitat for things like breeding willow warblers and whitethroats, I asked RBA to urge people to stay on the path (they did put this on a couple of messages), but I don't think it would've mattered. There is now a well trodden path into the reserve... 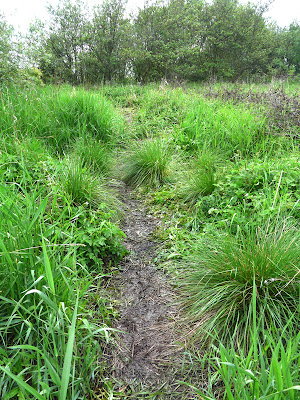 Even over the old bridge, onto the area between the willows and the phragmites that the bird was favouring wasn't off limits  to some. 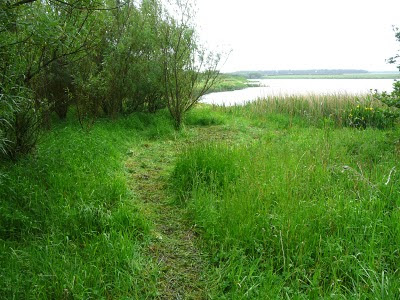 Still, as long as the photographers got their shot and the MP3 playing wazzacks got decent views, then everything is just OK!
Mr and Mrs Whitethroat might not have been so happy.
I've often thought what might happen at Druridge these days, if a real rarity turned up.. a county mega?
If it was viewable from the hides or the road, then it would be manageable., but if it was skulking warbler in the bushes....a different story. If  it was during the breeding season - forget it - the habitat would be destroyed.
In the autumn, this type of behaviour is not too much of an issue - but remember the damage caused by the idiots trying to flush out last year's Raddes warbler?
If I am ever lucky enough to find a rare bird skulking in the bushes at Druridge during the breeding season, you'll read about it in the bird club bulletin a month after it has gone.
Posted by Ipin at 23:38