Skylarks on the move

My first visits to Druridge of 2010 today, I've not managed a patch visit thus far due to partying, a cold (caused by the partying no doubt) then dismal weather.

More snow over night, but the morning was quite bright, so despite having manflu, I braved a visit to Druridge. It was a bit gloomy when we arrived but crisp and snow was falling out to sea, the first year-tick was Davey Elliott who had just been watching a bittern at East Chev. 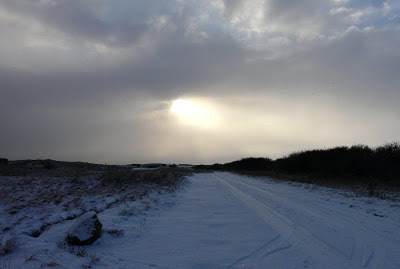 We walked up to the Oddie hide and had our first flock of skylarks going over, about 16. The big pool was full of ducks, including a single scaup, four pochards and a dozen or so goldeneye.
The walk back to the car was very picturesque in the sunshine. 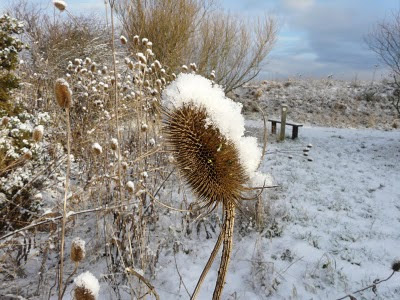 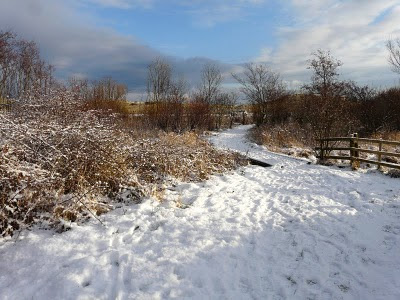 We went up onto the dunes for a look out to sea, with more flocks of skylarks, all going south, overhead. Our first scan produced some mentalists emerging from the sea...crazy! They're legs were so cold they looked like the redshanks on tideline brrrrr (I talked to a bloke who was with them and it was a charity stunt...still doesn't make them sane in my book). So bizarre behaviour at Druridge continues into 2010.
From the dunes we could actually see flocks of skylarks coming in off the sea, I picked up some so far out that they could not just have been cutting the corner from Coquet Island, these birds looked as if they've come from the continent. We had numerous flocks of 15-65 birds either flying south or west, this continued to dusk. I am always amazed by visible migration, but to see single species flocks on the move all at once like this was awesome. I reckon I counted at least 800 between 1100-1230 and 1330-1530. One poor individual was on the strandline, looking very bedraggled like it had crawled up the beach. We were cold so we went home for soup.
I enjoyed my morning visit so much I returned after lunch and walked along the dunes and beach, skylarks overhead virtually all the time. Where the burn runs out of the pool, I found a species I didn't see last year...rock pipit, there were two of them along the edge of the burn, I saw a third near the block house a the edge of a tidal pool, there were also meadow pipits along the beach and another good year tick - turnstone. 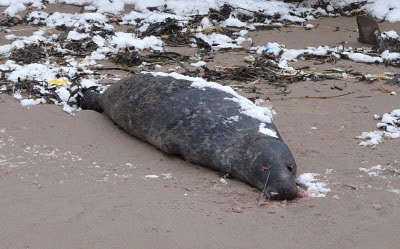 This poor seal isn't going to have a great 2010 - let's hope it fetches an ivory gull in!

I flushed a woodcock, another bird I didn't see in 2009, from the base of little sycamore in the dunes, obviously freshly arrived and I also spotted the colour ringed sanderling I first saw in August.
So hundreds of skylarks, lots of song thrushes and mistle thrushes on the patch and a freshly arrived woodcock...what else could come in?
Just as I was leaving at dusk, this flock of skylark came over 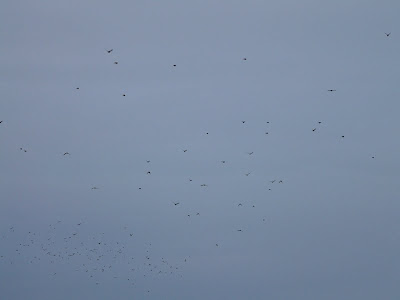 and there was still time for more bizarre behaviour! 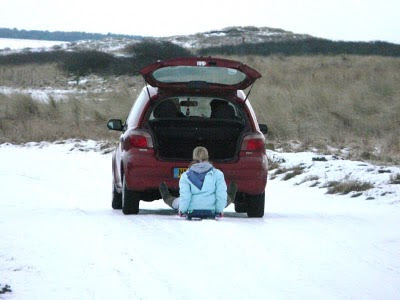 I saw a large movement of skylarks too, very impressive !

Struggled for Skylark so far this year - think all ours must have gone to Ireland! Flipping cold here

Why isn't your pool frozen up then ?

Well done on the Woodcock, I have only ever had them in one year, that was last year.

Warren, The whole reserve is basically a restored opencast coal mine, when they worked what is Druridge,they ran out of infill for another hole up the coast, so used the stuff from Druridge, when they finished, there was a very, very deep hole with now to put in it - so now Druridge is the deepest lake by far on the bay..

See http://ipinswildlifeblog.blogspot.com/2009/10/sunday-morning.html for an image of the site when it was being worked.

Love the blog, keep up the good work! I was trying to find contact details but couldn't so I posted.

We have just finished a new site for use by the birding community:
www.birdingnews.co.uk
We are contacting a limited number of people that we hope will let us know what they think about it before we take it out of beta. If you could let me know what you think that would be great.

We also have an iPhone app out that can be used in conjunction with the site, you can find out more about the iPhone app here:
http://www.birdingnews.co.uk/iphone/

and this links through to the app in iTunes:
http://itunes.apple.com/WebObjects/MZStore.woa/wa/viewSoftware?id=348791972&mt=8