As I arrived in Seahouses for a morning meeting, I got a text message from the office to say a sperm whale was on the beach at Beadnell.

I met the rest of our team down there at lunchtime, the whale was dead and we have it on good authority that it had been dead for some time, not as the BBC claim, that it died on the beach at Beadnell. The waves of the retreating tide making it look like it was moving..... 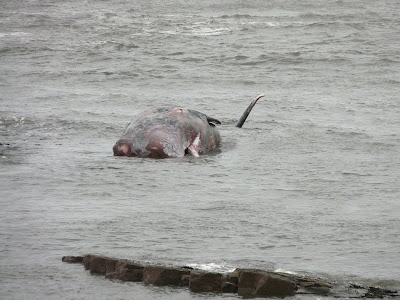 Quite a twitch was developing to the deceased beast and although sad to see it dead, it was still pretty impressive. 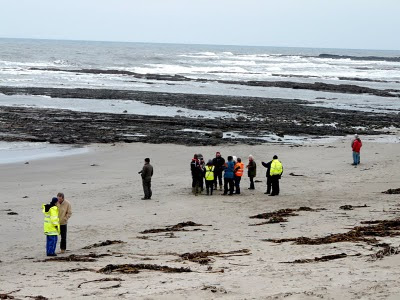 whale twitchers and other 'official' types 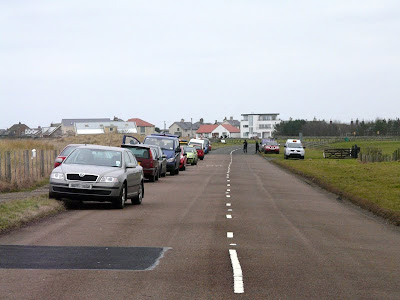 Funnily enough, at work last week I was researching the issue of seals on the beach and read about stranded, dead, cetaceans. Seemingly, any dead whale, dolphin, porpoise or sturgeon on the foreshore becomes a 'Royal Fish' and is the property of the Queen and such, any of these species over a certain length must be reported to the Receiver of Wreck.

I doubt Her Majesty will want this creature, but no doubt somebody will and it will be interesting to see them trying to get it off the beach. Shame really, I could just see an ivory gull coming down to it.

A team of people, led by Ian Douglas, are going to attempt to install a new floating island on Druridge Pool this Saturday. Sadly, I am of to Leicester to watch the toon, so will not be around to help. Rest-assured that photo's of the new island will be on here on Sunday though - hangover dependent!
Posted by Ipin at 20:25

I hope your team are a lively as that whale when you get down here to the mighty Walkers Stadium ......

I hope the team are more lively than I will be by the time i get to the walkers stadium after being cooped up in a van with a case of stella for four hours!

That video is feckin hilarious !!

Trust the good ole USA to deal with it like that !!

It's a pity they didn't ask our lot about it first. It rings a bell with me that there was a sperm whale washed up (Boulmer I think) about 20 years ago or so and they thought it would be a good idea to give it a pop with a few pounds of jelly.

Result - a bigger stinkier mess than the one before the pop.