Today's my birthday......37 since you ask.
I normally like to be somewhere warm for my birthday, but today I was not only in the UK but also had to go to work! It wasn't too bad though as work today was assisting on a press trip for a journo from 'Birdwatch' magazine to the Druridge area.
I met Dave and Martin Kitchen at Druridge at 11.00 am, it was a nice sunny morning, in total contrast to yesterday. There was a light westerly wind and a bit cold, but generally very nice. As we walked to the Oddie hide, we spotted this rather skimpy pair of red pants hanging in the tree by the little hide - welcome to Druridge Pools! 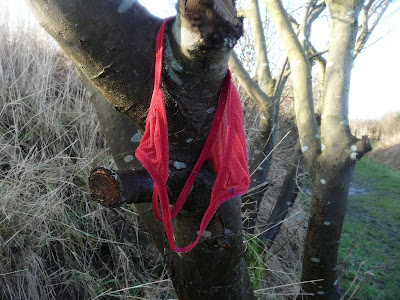 You would have thought has been far to cold for any of that carry-on!
There was lots of wildfowl back on the pool after the big freeze, including seven goldeneye and ten pochar, offshore there were at least 15 red-throated divers, a guillie, a couple of razorbills and 60 or so common scoter further north. These feathers were on the path to the oddie hide, they look like they've come of a game bird, pheasant was my guess, but I'm not good at feather ID - any thoughts? 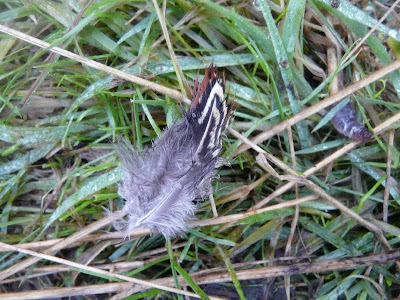 We took David for lunch at the Country Barn at Widdrington, stopping to see this family of the whooper swans on the way, then to Cresswell Pond where a nice barn owl was showing off and a skein of 800 or so pink-feeted geese came over. At the north end there was a covey of 16 grey partridge, good to see they, and two stonechats, survived the freeze. 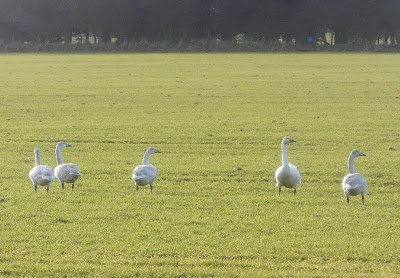 Feather looks like a red legged partridge, not sure about the pants though!

The red pants? An ideal accompaniment for BB's camo tu-tu?

There's a tree at QE2 which has a different bra on it everytime I visit! Perhaps this is a hybrid.

I have it on good advice that the feathers are from a pheasant...the pants are probably from a pro!