Rough - what the sea was today and what I will be tomorrow......

As a result of yesterday's easterlies, there was a really huge sea running and today it was still bitingly cold as I stood on the dune scanning through the breakers - to be honest it was like weeing into the wind, I could pick up a couple of red-throated divers and some shags but the sea was too rough....and I was freezing!

Despite wearing nearly everything I own, big thick socks and waterproof over trousers, I was cold. However, some nutters on the beach were obviously tougher than me - they were playing footie in T shirts, one of them was wearing shorts and if that wasn't punishment enough, he took his trainers off and ran round barefoot for 20 minutes! Druridge doesn't disappoint - bizarre behaviour right up to the last day of the year. 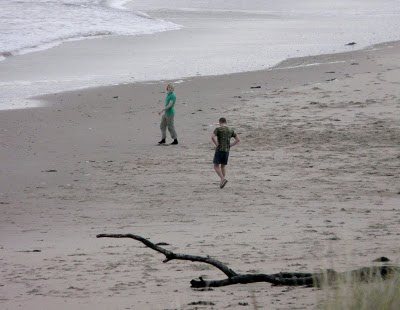 The fields behind the meadows were full of birds, starlings, lapwings and crows mainly....but, also a year tick! Seven stock doves were in among the mix. 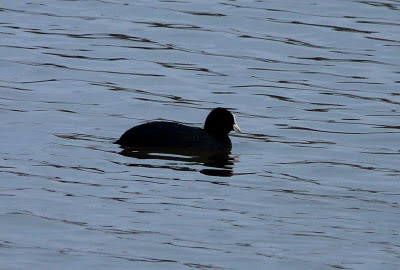 Coot - one of 11, a modern-day record for Druridge

Before the snow set in I checked the big pool, still five pochards and a record count for 2009 of 11 coots! Then I got my eye onto something odd, on it's own by the island - a duck with a cheek patch - redhead smew was going through my mind - but it was all dark. It took me a short while to fathom as the bird was totally out of context, it was a female type common scoter. I don't think I've seen one at Duridge that hasn't been offshore, it, and the drake red-breasted merganser that was also there must have gotten sick of the rough seas and headed for the safety of Druridge Pool. 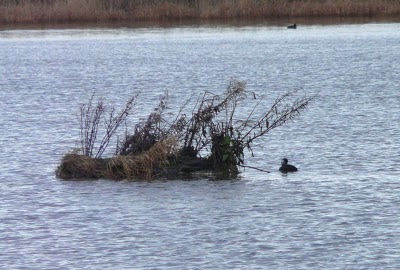 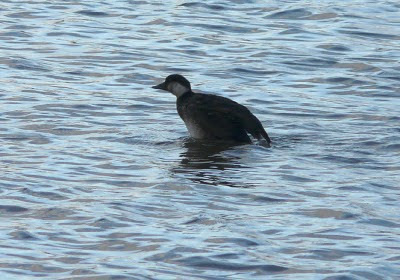 Common scoter - totally out of context
So, that was it, last visit to the patch of 2009. It's been an interesting year, not record-breaking by any means. the year list stands at 157, one less than 2008.
Two new birds were added to the patch list during the year....and they were monsters, firstly, the glossy ibis in October, part of an national influx, arriving whilst I was in Spain, thankfully staying for over a month. The second addition was the raddes's warbler, caught and ringed by Neil Anderson, Tom Cadwallender and myself in October whilst Janet was in Canada, as the year draws to a close I think I am forgiven... 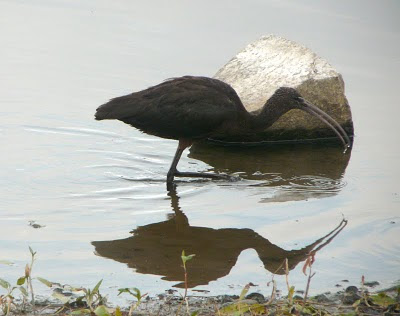 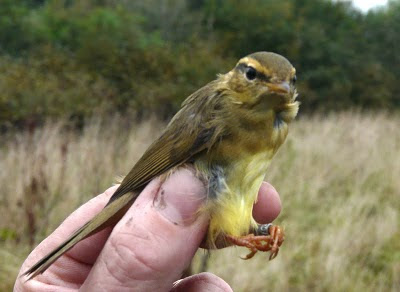 Some obvious omissions from the patch list this year include both spotted and pied flycatchers (probably due to these species population decline along with many other trans-Saharan migrants), merlin, pintail, woodcock, whinchat and little auk.
Other highlights this year included spoonbills, garganey (both now almost annual at Druridge), buff-breasted sandpiper, sabine's gull, yellow-browed warbler, firecrest and long-eared owl.
NWT did much in 2009 to improve the habo on their side of the divide, getting the vegetation levels right for the spring which meant a better year for the lapwings and snipe and getting the grazing and water levels right for the wintering dabbling ducks, the grazing animals arrived too late for autumn wader passage though.
So, looking forward to 2010 - hopefully more ringing - including those still elusive twite, good spring and autumn falls and NWT to continue and improve on this years good work. I plan to a CBC style survey of the whole patch in 2010 to give a bit more focus to by patching.
So, to all the readers of this blog, I wish you all a happy, healthy and prosperous 2010 -BRING IT ON!
157 stock dove
Posted by Ipin at 17:54

Happy new year mate. I know what you mean about birds out of context, I ''heard'' a meadow pipit call - see see seee, from a hawthorne bush, no way I thought, when I checked it out it was a Great Tit mimicking!

FFS STOP PUTTING THAT PHOTO OF A BORST RADDES ON YOUR BLOG! :) HAPPY NEW YEAR...

Cheers Warren! Don't worry Stew that is the last you see of the radde's for a while...maybe until the next one!