A bit of a thaw has started over night, quite a lot of snow had gone from the garden, uncovering the apples I put out for birds last week. There was a force 6 easterly wind though, which made the 4 deg C the car said it was, feel more like -4. 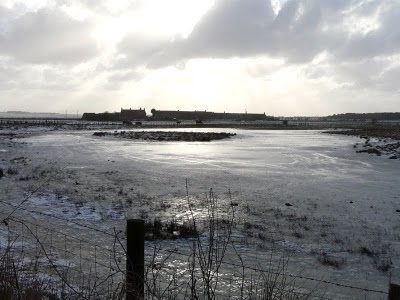 Today was only my second visit to Druridge of the year, I have been on Jury service all this week so no chance of a mid-week visit. Despite the thaw, the Budge Fields were still completely frozen and the only bird was this grey heron, poking at some unidentified food item it had found. 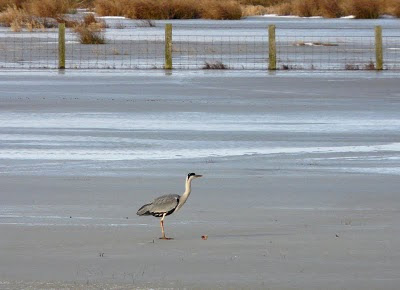 The big pool was also pretty much frozen solid, other than a small pool of open water in the middle, occupied by bathing gulls, all of the four common species were there, other than a small group of mallard and teal and a couple of coot on the bank, the pool was deserted. 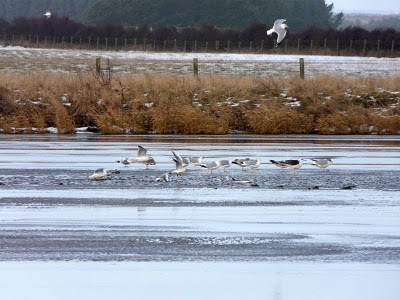 Gulls making the most of the unfrozen pool
Despite the strengthening, freezing cold, easterly, I trudged up the road to the north end to check out the area where the farmer is over-wintering his stock, where I had a few meadow pipits last week. 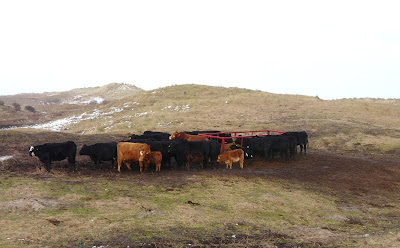 I was surprised to see a flock of about 30 skylarks feeding by the cattle and even more surprised to see (and hear) a lapland bunting amongst them. As I started scanning the flock for more, they lifted, a bird of prey came through them, I saw it take a skylark out in flight, the bird of prey was a male kestrel!

I have seen kestrels take ground dwelling birds before, but I have never seen one actually take out a flying bird in the same way a merlin or sparrrowhawk might. I guess the kestrel has been finding pickings to rather lean during the last few days and has resorted to whatever means it can?
The feeding flock moved over the ridge and I left them to feed in peace, I will check them again this week though.

Predictably the sea was monstorously rough, I love it when it is like this, with great clumps of foam blowing up the beach into the dunes. There were a lot of waders on the shore, including, 35 sanderling, 6 turnstone, 16 redshank, four dunlin and a ringed plover. 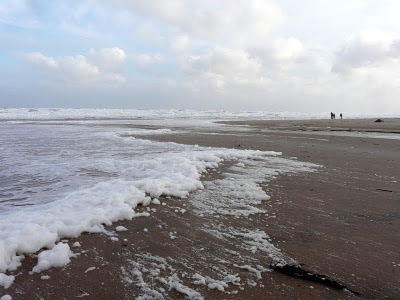 Warren, I think they are all pretty much knackered because of the weather..