In my desperateness to get to the pub (actually the Hirst Central Club in Ashington to be precise) on Friday night, I forgot to mention a bird we heard but didn't see on Friday morning. I actually heard it briefly on Thursday evening's visit in the hawthorn's at the entrance to the Budge screen - marsh warbler...I thought, but not being familiar with them, i would check my CD's.

On Friday morning, when Janet and I were putting up the nets, the bird was again singing in the same place, we were both sure it was marsh warbler, so I phoned the only person who be out and about at this ungodly hour - Dave Elliott - who had already done a lap of Chev. By the time DE had arrived and we got back down there it had shut up - maybe we had disturbed it? We hoped we might catch it, but didn't.

So a text from DE on my mobile which I left in the car and only rediscovered at lunchtime today reads...marsh warbler singing in same place you had it (Saturday evening)...So, in a car with buggered windscreen wipers, I heads down there, Neil Osbourne had been there 40 minutes without luck, he and Tony went, I gave it another 20 minutes or so, then went back towards the road were JF and I had first heard it, shortly after I heard it, once the several sedgies had piped down, singing from the alders and hawthorns near the small pond (yes Stewart...the one were the travellers shit...). Get in! I would never offuv ticked it on song alone, so it was great to see it and nail it. First patch tick of 2008 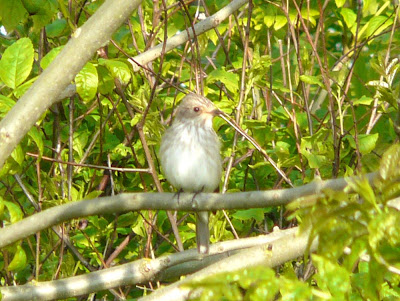 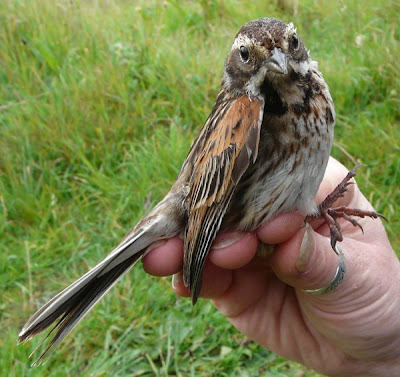 Thats the queerest Reed Warbler I've seen. Did you count the piles of Gyppo's crap? Its probably degraded by now. The flies it attracts will be good Marsh Warbler bait...

It was like a fuggin pikey turd minefield when I used to ring down there !!

The best thing the NT ever did was put the mounds in to keep the filthy bastards out.