Five year ticks tonight at Druridge and they were all at sea, I only decided to look on the sea as I was heading home, just before the rain started. First birds seen, through the bins, were 12 manx shearwaters feeding close in, next was a bonxie sat on the sea, then both arctic and common tern, then more, then more....last was an arctic skua - doing what arctics do best - chasing terns. Also on the sea were two RTD's, one in spanking breeding plumage, the other a rather tired looking non-breeder, a female common scoter, fulmar and many gannets, terns, gulls and auks. On the cetacean front, there was a single harbour porpoise.

2 whimbrel flew north up, low, up the beach, joined by a third offuv the beach. 4 sanderlings were on the waters edge, one in top breeding nick. Sanderlings are a fantastic looking bird when seen in this plumage.

Elsewhere on the patch, starling numbers have increased, but no pink-jobs! One of the three stonechat pairs in the dunes had two young fledged and there were also fledgling blackbirds, chaffinches, carrion crow, magpie and linnet. There were three mistle thrush, not sure if this is a family party as I didn't see them well, I expect it is as one of the adults has been seen on my last few visits, so I expect they are local breeders. 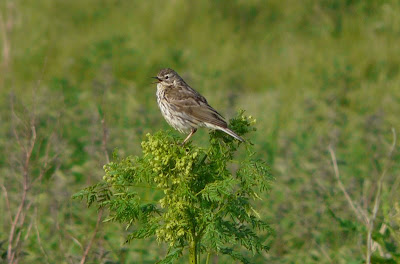 Saw my first brood of gadwall chicks this evening too, not an exact count as they scooted across the water between the rushes, but there were at least 8, probably 2 or 3 more. Finally as I was leaving, the long eared owl was hunting along the back of the woods. All in all a pleasant evening....until the rain stopped play.

I took some flower shots at the weekend and have just found time to post them, they were all taken on the path to the Oddie Hide, the top one is northern marsh orchid, then a partly opened common spotted orchid and finally vipers buglos, which is now suffering from being star-struck (it is also on boulmer birder and abbey meadows) 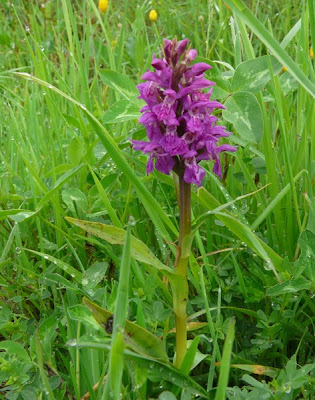 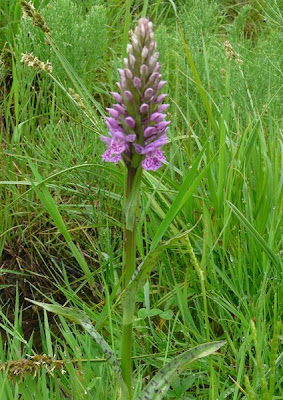 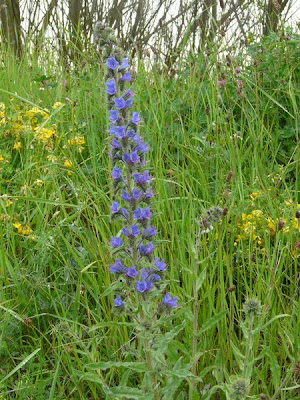 I'm pleased i did not feature your 'blue flower'.
Took pictures though. It's a stunner, keeping my eyes open for seeds.

I recognise that Vipers bu.... According to Swan's bible they are quite scarce in the county. Hauxley being the best place for them until me and Boulmer birder found hundreds of them growing at the old brickworks at Stobswood. Even John Carpenter of Ulgham meadows twitched them! No doubt these will disappear when the site is redeveloped.