A day off! Fantastic, but a huge post-football hangover meant I didn't get down to Dru as early as I would've hoped, did the WeBS count first, only a kingfisher of note. The dog otter was about too, but too distant for piccies. 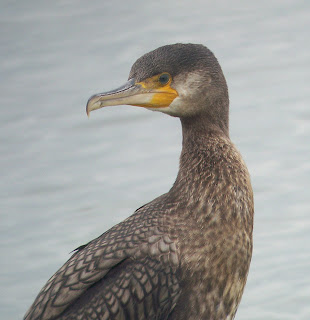 Close up cormorant
I decided to check the bushes at the northern end of the patch. Were the band of trees narrows, there was a tit flock moving through and pishing it produced some coal, blue and great tits, a couple of cresties and a wren and then a yellow-browed warbler comes right to the front of the whitebeam - fantastic! It was only there briefly, but showed well (I saw it again later). I reckon that's my third for the patch, so a nice bird indeed. TAC came down to twitch it for his year-list which needed a boost after spending most of the year abroad! I checked the plantation and the entrance willows next, there were a few robins, wrens and cresties, a great-spot and a couple of blackcaps - not the firescrest I was hoping for though. It would have been a perfect day for ringing and we would've a good chance of catching the browed one, but JF has gone back to work - Sods Law!
On the sea, the RTD's now numbered 19! A couple of stonechats were in the bushes in the dunes and 3 mistle thrushes came in off the sea. 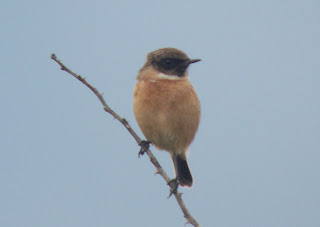 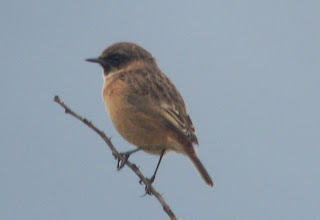 Ask any birder who gets down to the pools regularly and they will have a tale or two about some strange behaviour they have witnessed there (most of which will be distasteful, if not illegal!!) the place is like a magnet for freaks and weirdo's. Today's odd activity was a first for me though, - two women on the beach burning a wedding dress on a concrete tank block whilst drinking cider. This is a patch tick on my 'odd druridge behaviour' list. 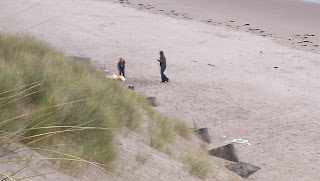 On a positive note, there are more cows, still not enough and only on the southern field, but still, an improvement. It would take fifty cows, not 7, to make a mark on this veg. If the veg is high, which it has been since FMD year cos NWT haven't grazed the site, the waders don't breed in anywhere like the numbers they used to.

I was ringing with JF yesterday (Sunday) but rain stopped play. we caught a few birds though, including half of the goldfinch flock, nothing unusual though. We also had a greenshank on the budge and the kingfisher on the pool.
Posted by Ipin at 18:54