Well, I am totally gutted, but not as gutted as the Leach's Petrel that was seen off Dru this morning, being killed by gulls then eaten by a cormorant. All while I was on the patch taking nets down or ringing or summick. This bloke wanders up to me and says " have you seen the otters?" then "oh and some bloke in the hide has seen a leach's petrel gettin killed offshore". I'm like "what, here? - when" "SHIT!!". Not only would Leach's have been a patch tick, but a British tick! Bugger!
Even though there was absolutely no point in going to look on the sea, I couldn't even tick the remains as the cormorant had gobbled them up, I went anyway. I called the Boulmer Birder to see if it was on his pager, which he confirmed and went onto to remind me that ringing puts an end to proper birding. grrr. Richard Dunn joined me, we had about 12 RTD offshore and a velvet scoter and two common terns going south. 29 sanderling were on the beach and a couple of fieldfares came in off the sea into the dunes. 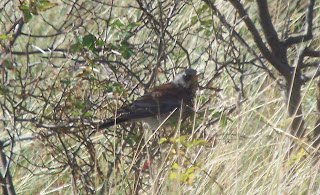 Before all of this kerfuffle, Janet and I had been ringing and butterfly spotting on the sunny side of the wood (4+ red admiral, 1 small copper and a comma). Ringing totals were:
blackbird 2
blackcap 1 fem
goldfinch 1
redwing 1
goldcrest 1 (retrap)
wren 2 (1 retrap)
great tit 1
coal tit 1
robin 2
flocks of long-tailed tit (8) and siskin (8) were flying about but we didn't catch them, still plenty skylark passing over too.
Posted by Ipin at 21:55