An overcast morning with no wind at all, the cloud burned off by 09:30ish, but we still caught some nice birds, most of which we reckon were new arrivals. Best of the bunch for me were two Geat Spots, both juvs, one of each sex. Despite them drawing blood from both me and Janet, they are stunning birds. 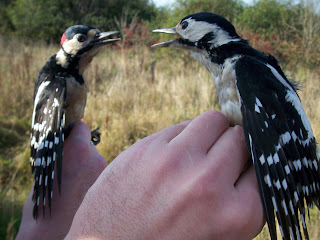 We also caught a handful of blackbirds and wrens and a couple of dunnocks, goldcrests and a single redwing, I do like redwings they are just nice! skylarks were passing overhead still this morning and there were still thrushes coming in off the sea. 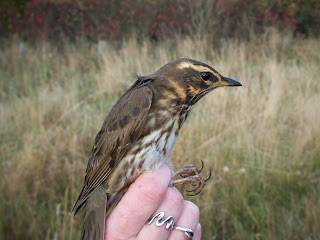 Mega rare fro Dru, my second and third records, were two comma butterflies, there were many red admirals too as well as common darter and a hawker species of dragonfly. The beeb forecasts fog tomorrow morning and a very southerly....we will see.
Posted by Ipin at 17:12