I've not been to DP over the weekend, was at the Carling Leeds Weekend, watching bands and generally getting wasted, I did have two red kites over the campsite though, really close to the, mostly worse for wear, campers. (Leeds photo's on facebook)
To recover my excesses I headed down to DP for a couple of hours this afternoon, of note on the meadows were 19 Dunlin and greenshank. There were two or three willow warblers in the bushes by the screen hide and a painted lady butterfly with lots of wall browns on the track. 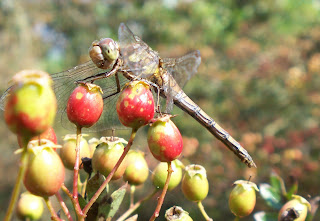 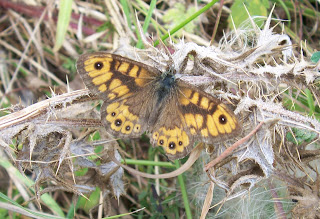 Nothing of note on the pool. I then did an hours seawatching from 4 til 5pm:
arctic skua (1 pale, 1 dark)
manx shearwater 16 (feeding with 100+ kittiwakes)
common Scoter 120 and 80 south
velvet scoter 1
red-throated diver 2
bonxie 2 (north)
sooty shearwater 12 (all north)
whimbrel 1 south calling.
The Seawatchers at Newbiggin had 3 great shearwaters past by 1800 - sods law, so I headed back down to Druridge for another hours seawatching from 1900-2000. No great shears for me but:
Sooties 19 north
manxies 48 north
arctic skua 1
bonxie 1 south
Posted by Ipin at 21:39