Work is tough, I'll tell ya, I've just had to endure a weekend at the British Birdfair in the name of work! (seriously it was totally knackering). I reckon the Birdfair is a must visit event, if only 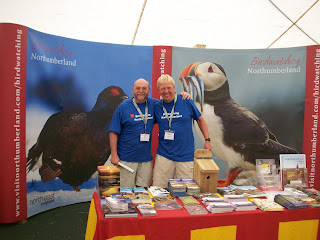 once, for every birdwatcher, seven marquees packed full of the latest optics and gadgets, books, art, clothes as well as holiday firms and birding destinations from all over the world. To be honest, far too many opportunities to spend far too much cash, which I did in spectacular style, not only buying 4 books when I wanted 1, but also booking an £1100 trip to India. . No time for any birding at Rutland though, not only was I on the Northumberland Stand, but was volunteering on the BirdLife Malta stand during my time off. This is our stand with TAC and Mark Winter getting a bit friendly(!!!) and John-boy Whalton in action.Cracking shots for the 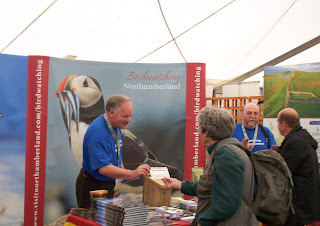 
I got a text from STH this morning telling me he had a little egret from the Budge Screen at DP, bugger it, I was on my way to work in the work van with no scope or bins. Called down there tonight after work, but it had gone, in fact a greenshank on the Budge fields was the only thing of note, so I decided to a quick seawatch as there had been bits and pieces reported on Birdguides from further down the east coast. Typically for Druridge, the three sooty shearwaters I had were distant and they came through together, other than a few manxies and good numbers of gannets and kitti's, little else was on the move. Much more interesting though was what was loitering on the sea. About 1/3 of the way out was a black-throated diver, these are by far the most scarce of the three divers that regulalry occur in the bay, this was an adult, well into winter plumage. Unfortunatly it was too far away to get any photo's. Also loitering offshore were c90 common scoter, 2 red-breasted merganser, great-crested grebe and a handful of guillie's and razorbills. 12 sanderling were on the shore. The cold NE wind made it feel very autumnal. On the way home I noticed that the two spooners had moved to Cresswell Pond - they definately enjoy each-others company! 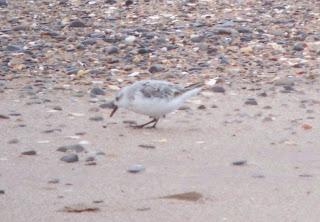 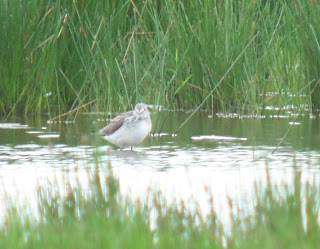