I hate the winter, especially this time of year when it is hardly light and you get days and days of damp gloominess like we've seen for the last couple of weeks. Today was nice though, a crisp, bright and sunny winters day...and I was fortunate to have the day off!
So, bright and early (despite going to see the Yeah Yeah Yeah's at the Academy last night, who were truly awesome) we headed for our Atlas tetrads near Kirknewton on the northern side of the Cheviots.
It was great to be out, giving the old serotonin levels a boost, but the only problem with the Cheviots a this time of year is that the sun rarely gets high enough in the sky to peak over the tops and shine into the valleys.

like night and day...winter in the Cheviots
We did two tetrads and, for the winter, saw a lot of birds, certainly more species than we expected too. Lots of thrushes on anything with berries, a couple of buzzards and a kestrel, two great-spotted woodpeckers...nice stuff!

On the way home we called by Druridge to check the twite scenario, again, the niger had all gone and was topped up, we did locate the twite, at least 80 of them in a mixed flock with goldfinch and linnet, maybe 130 in all, sadly they were all down in Willie Bell's Dunes at Hemscotthill. A flock like this could certainly quickly gobble up a load of niger seed, so I really need to spend some more time down there, hopefully over the Christmas break we might get to catch some.. 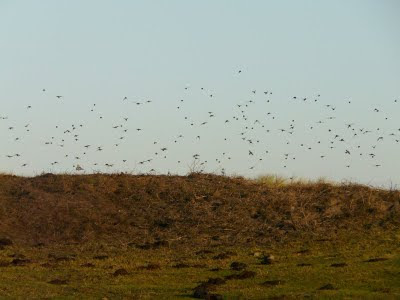 At least they are coming in Ipin. Good luck in catching some!