This afternoon, a crack team of heron ringers assembled at Druridge. Well, to be honest, the only 'crack' member of the team was John Richardson, the rest of us had never ringed herons before and were following John's lead (Me, Janet and David Leat)

The heronry at Druridge is in a pine shelterbelt, I had already checked it out and found 10 apparently occupied nests. Now it was time to see if we could ring any of them.
Being the smallest, I was elected/bullied into being the climber, this is me all kitted and ready to go, the shades aren't a fashion accessory, they were to protect my eyes from herons bills......honestly! 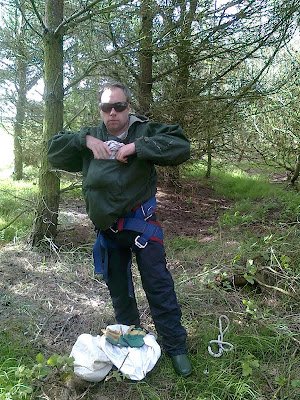 Kitted up and ready to go - bird bags, dodgy shades and harness
Unfortunately we were about two weeks too late and many of the birds were too big to ring or too big to get through the foliage. We did manage ring four, two from two nests. They are fantastic birds with a sharp yellow 'beady' eye looking at you from the nest. I always think they look quite pre-historic, like pterodactyls. 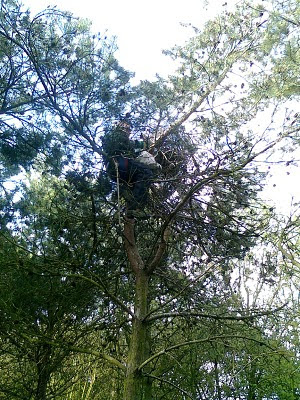 Me, up the tree 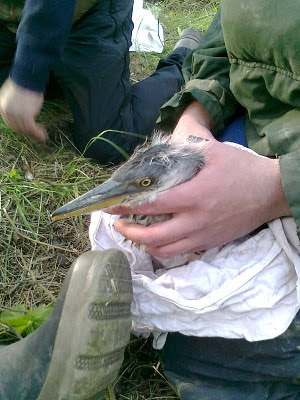 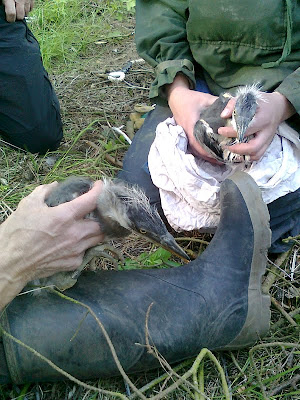 We might get back next week, with a ladder, to ring the one's we couldn't reach. Next year though, we need to be there a couple of weeks earlier.
Posted by Ipin at 23:07